Italy’s Salvini blocks own coastguard ship with migrants on board 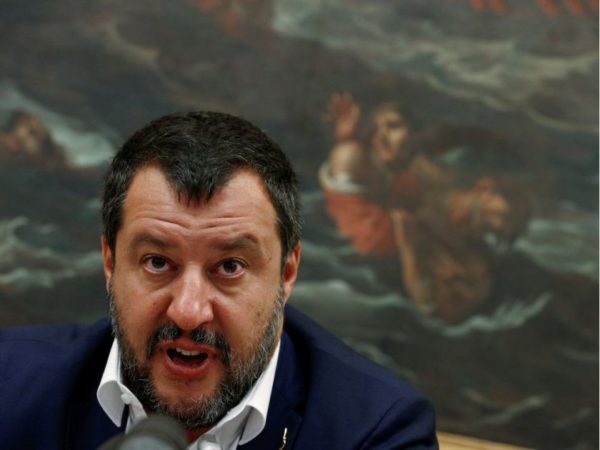 Interior Minister Matteo Salvini said on Friday he would not let an Italian coastguard boat carrying 135 migrants dock until European Union countries agreed to take them in.

The Gregoretti coastguard vessel rescued the migrants on Thursday from two boats off Malta, but was awaiting orders on where it could take them.

“I will not give any permission for them to disembark until Europe commits to accept all the immigrants on board,” Salvini, who is head of the far-right League party, said in a statement.

Rome has asked Brussels to coordinate migrant redistribution between member states, a European Commission spokeswoman said on Friday, adding that the EU executive would act to this effect.

Salvini, who is also deputy prime minister, has staked much of his political credibility on a drive to halt migrant flows and has drawn protests by closing Italy’s ports to charity rescue ships.

Last August, he prevented another national coastguard boat carrying 150 migrants from docking for five days until Albania, Ireland and Italy’s Catholic Church agreed to take responsibility for them.

Italian magistrates placed the interior minister under investigation for kidnapping, but the upper house Senate blocked the probe in February, ruling that Salvini should benefit from parliamentary immunity.

As Italy shut its ports to migrants, Malta on Friday agreed to take in some 143 people its armed forces had rescued in two separate operations.

The United Nations refugee agency (UNHCR) said it feared around 115 would-be migrants drowned in a shipwreck off Libya on Thursday as they tried to reach Europe in a rickety wooden fishing boat.