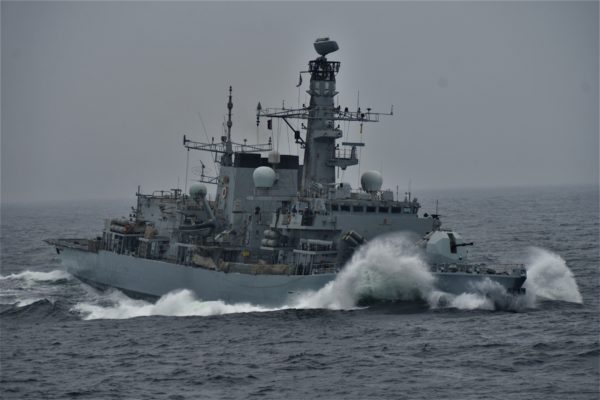 The British warship was said to have been less than 5 miles behind the tanker but soon intercepted the Iranian boats and threatened to open fire. A manned U.S. reconnaissance aircraft was above as well, the official said, adding that Iranian forces left without opening fire.

Navy Captain Bill Urban, spokesman for the U.S. Central Command (CENTCOM), said the military was aware of the reported actions. He added, “Threats to international freedom of navigation require an international solution. The world economy depends on the free flow of commerce, and it is incumbent on all nations to protect and preserve this lynchpin of global prosperity.”

The British frigate was identified as the HMS Montrose, according to The Sun. The vessel reportedly trained its 30mm deck guns on the enemy fleet and warned them off.

The incident was the latest in a series of provocations between the Islamic Republic and the West. British forces last week seized an Iranian supertanker that officials believed was operating in violation of European Union sanctions. The British Royal Marines captured the vessel in Gibraltar after believing it was trying to provide crude oil to Syria, an ally of Iran.

Iranian President Hassan Rouhani warned that Britain would face repercussions over the seizure.

Last month, Iran shot down a U.S. drone over the Strait of Hormuz, a vital waterway separating Iran from the United Arab Emirates. Oil exporters transport around 22 million barrels of oil per day through the strait.

U.S. officials also blamed Iran for attacks on six oil tankers in the area. Secretary of State Mike Pompeo has accused the regime of trying to disrupt the flow of oil in the area.

Tensions between Iran and the U.S. have escalated in recent weeks and could spiral downward after Iran admitted Monday it surpassed uranium enrichment levels that were set by the Iran nuclear agreement in 2015.

President Trump pulled the U.S. out of the deal last year but several EU nations remained involved. Those countries — Russia, China, Germany, France, Britain, and the European Union — have called on Iran to stick to its commitments under the deal.

Iran has abandoned restraint in recent months as it seeks relief from U.S. sanctions. The republic has asked the deal’s signatories to provide economic incentives in exchange for the de-escalation of its nuclear program.

Trump has indicated he will impose additional sanctions on Iran and urged those nations not to give in to its demands.

Iran has long been secretly “enriching,” in total violation of the terrible 150 Billion Dollar deal made by John Kerry and the Obama Administration. Remember, that deal was to expire in a short number of years. Sanctions will soon be increased, substantially!