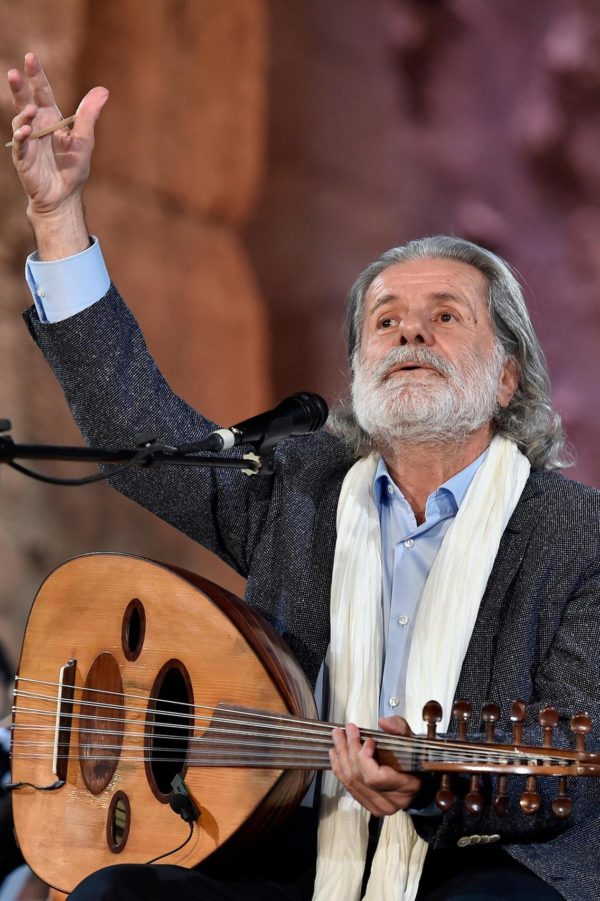 Baalbeck – Lebanese music legend Marcel Khalife opened the Baalbeck International Festival this year, with a rousing two-hour-long performance from the steps of the Bacchus Temple in Baalbek on Friday, July 5.

But, the fact that the 69-year-old refused to play the national anthem, which is customary on the opening night, has angered many.

It was considered particularly shocking for some because Khalife is known for his patriotic and nationalistic lyrics and compositions. Lebanese tabloid site Al Jaras reported that the mayor of Baalbek stormed out of his performance because of the perceived snub.

Critics of the move have taken to social media to call Khalife unpatriotic, saying he spoiled a special moment. While others have supported him, saying that he’s speaking up, and should be applauded for that. He himself has written a lengthy post on Facebook claiming that he chose not to perform the anthem because of his sense of patriotism, rather than a lack of it.

“The streets of our country are overflowing with trash, power outages are around the clock, the environment is contaminated, including food and drink [causing] diseases. People are dying at the doors of hospitals, our mountains have turned into sand and gravel,” writes the composer, singer and oud player.

“The streets of our country are overflowing with trash, power outages are around the clock, the environment is contaminated, including food and drink [causing] diseases. People are dying at the doors of hospitals, our mountains have turned into sand and gravel,” Marcel Khalife

He goes on to say that the nation dreams of “Assi and Mansour Al Rahbani, Zaki Nassif, Toufic Al Basha, Filimone Wehbe, Sabah Wadea Al Safi and Nasri Shams El Dine,” referencing great Lebanese musicians who were prominent in the middle of the 21st century, pointing to his nostalgia for the Lebanon of the past.

“Their homeland is my homeland,” he writes.

The post is poetic and long, but in one moment he directly addresses the criticism of his choice not to perform the national anthem: “At every turn you take, your opponents surround you with gossip… I [would] resist the storm with oud strings.”

He litters lines from the national anthem itself throughout the post, including, “our valor and our writings are the envy of the ages” and “our mountain and our valley / bring forth stalwart men”.

He adds some of his wishes for the future of Lebanon, a country that is home to more than 4 million, and has a strong  12 million diaspora across the globe – from Mexico to Australia. “Everything is dirty. The country has become narrow, narrow! May you wake up to see a country where green landscape is still green and water is still water and dreams are still dreams even if they are disappointing.

“We want a country which is no longer obliged to spoil innocence in order to preserve itself, no longer stifles pure voices, no longer subdues aspirations to the future and no longer replaces the vigour of excitement with the squalor of despair.”

In a truly poetic moment, he ends the Facebook post with “may you wake up to see a homeland”. This seems to act both as a plea, reemphasising his position, but was also the name given to his concert at Baalbeck.

The backlash Khalife is seeing is somewhat reminiscent to that received by Colin Kaepernick, who began the movement to “take a knee” during the national anthem in NFL matches in protest of many things, including what he considers the US’s systematic oppression of people of colour.