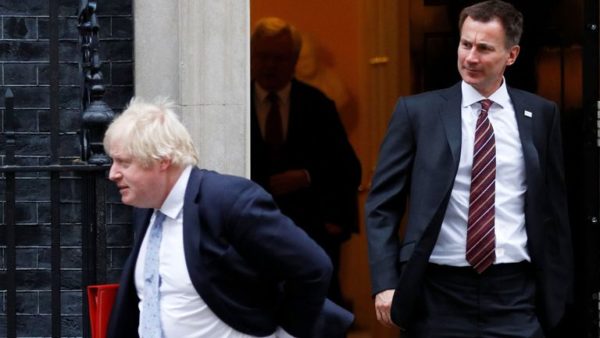 Boris Johnson and Jeremy Hunt, rivals to become Britain’s next prime minister, clashed over who could be most trusted on Brexit on Tuesday in a sometimes bad-natured television debate just two weeks before one will be crowned.

With Johnson way out in front of the race to replace Prime Minister Theresa May, both were asked repeatedly to prove that they would take Britain out of the European Union on Oct. 31 and would protect business from a so-called no-deal Brexit.

More than three years since Britain voted to leave the bloc, Brexit is dominating the race, with both candidates trying to point out the other’s weaknesses.

Former London mayor Johnson raised questions over Hunt’s commitment to leaving on the Oct. 31 deadline while foreign minister Hunt criticised Johnson for relying on what he said was nothing more than optimism to win a deal.

“I think it’s very, very important not to envisage any circumstances in which we would fail to come out of the EU on October 31,” Johnson told a debate on ITV television in front of an audience.

Asked repeatedly whether he would quit as prime minister if Britain failed to leave by the deadline, Johnson refused to answer directly, saying: “I don’t want to hold out to the EU the prospect that they might encourage my resignation by refusing to agree a deal.”

That prompted Hunt to accuse Johnson of avoiding direct answers and relying on nothing more than optimism to win a new deal from the EU, or to leave without a deal which would hurt businesses across Britain.

“Because Boris never answers the questions, we have absolutely no idea what his premiership would be like,” Hunt said.

The ITV debate was the only head-to-head meeting between the two candidates. Conservative Party members are submitting their postal ballots to appoint the new leader of their party, and the leader of the country, who will be announced on July 23.

With Hunt lagging in the polls, he has gone on the offensive, spending much of the hour-long debate accusing Johnson of never answering questions.

Some in Johnson’s team say his lead is all but unassailable, and would only be at risk if their candidate commits a major mistake, something, based on the laughter and applause from the studio audience on Tuesday, he avoided.

However, Johnson did state the wrong year when talking about the date of the Brexit referendum.

Many Conservative supporters say that the most important argument is who can take Britain out of the EU on deadline, with or without a deal.

The one thing that did separate the two contenders was Johnson’s refusal to rule out suspending parliament to force through a no-deal Brexit, while Hunt said he would not resort to such a move.

Even when asked to what they most admired in their opponent, neither offered much praise. Johnson said: “I’ve worked very well with Jeremy over many years, I greatly admire his ability to change his mind,” a reference to Hunt’s support for the Remain campaign in the 2016 Brexit referendum.

Hunt shot back sarcastically: “He has this great ability -you ask him a question, he puts a smile on your face and you forget what the question was. It’s a brilliant quality for a politician, maybe not a prime minister though.”

Johnson declined to say whether he would keep the country’s ambassador to Washington in his job after the envoy was criticized publicly by U.S. President Donald Trump. Outgoing Prime Minister Theresa May has given her full support to Washington envoy Kim Darroch after he described Trump’s administration as “dysfunctional” and “inept” in memos that were leaked to a British newspaper on Sunday.

Asked if he would keep Darroch in his job if he becomes prime minister, Johnson said: “I’m not going to be so presumptuous as to think I’m going to be in a position (to do that)”.