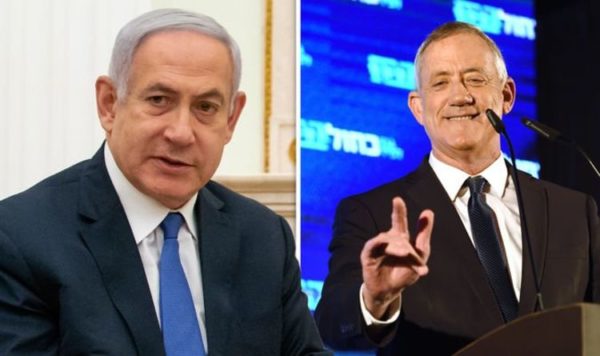 Exit polls in Israel suggest there will be no clear winner in the closely fought general election.

The centrist Blue and White alliance of former military chief Benny Gantz was projected to win 36 or 37 seats, with the Likud party of Prime Minister Benjamin Netanyahu taking 33 to 36.

Both men have claimed victory.

Two exit polls predicted that right-wing parties allied to Mr Netanyahu were more likely to be able to form a governing coalition.

But a third exit poll predicted that the bloc would be tied with centre-left parties allied to Mr Gantz.

“We won! The Israeli public has had its say!” Blue and White said in a statement. “These elections have a clear winner and a clear loser.”

Mr Netanyahu tweeted: “The right-ring bloc led by Likud triumphed conclusively. I thank the citizens of Israel for the vote of confidence. I will begin the task of forming a right-wing government with our natural partners tonight.”

No party has ever won a majority in Israel’s 120-seat parliament, the Knesset, and the country has always had coalition governments.

Analysis by the BBC’s Tom Bateman in Tel Aviv

At the election night event for Benny Gantz in Tel Aviv, a huge cheer went up as the first exit poll was released.

His supporters expressed confidence that Israel could be on the brink of a new centre-ground government.

“Change is on the way,” one activist told me above the roars of celebration.

But the outcome is far from clear. At the last election, the exit polls were dramatically wrong.

And the real politics start now if there is a close result – as both main parties canvas Israel’s president for the right to start talks to assemble a coalition.

Mr Netanyahu could overtake Israel’s founding father David Ben-Gurion as its longest-serving prime minister if he is re-elected for a fifth term.

The 69-year-old has put forward tough messages on security, which is one of the election’s key issues.

He also made a significant announcement in the final days of the campaign, suggesting a new government would annex Jewish settlements in the occupied West Bank.

The settlements are considered illegal under international law, although Israel disputes this.

Mr Netanyahu is also facing allegations of corruption which he denies. He says he is a victim of a political “witch hunt” aimed at influencing the election.

The Arab alliance, Hadash-Taal, said it was an “illegal” action that sought to intimidate Arabs. Likud said it wanted to ensure only “valid votes” were cast.

Mr Netanyahu’s main challenger, Mr Gantz, is a retired lieutenant-general who formed the Blue and White in February, promising to unite a country that had “lost its way”.

The 59-year-old former chief of staff of the Israeli military can rival Mr Netanyahu on security and is promising cleaner politics.

Mr Gantz’s campaign platform refers to “separation” from the Palestinians but does not specifically mention them having an independent state. It also calls for continued control over the Jordan Valley and retaining West Bank settlement blocs.

What are the exit polls predicting?

The three predicted that the left-wing Labour party would win between six and eight seats, and the left-wing Meretz party between four and five seats.

It was not clear how many of the more than 40 smaller parties contesting the election would win at least 3.25% of the national vote – the threshold for entering parliament with four seats.