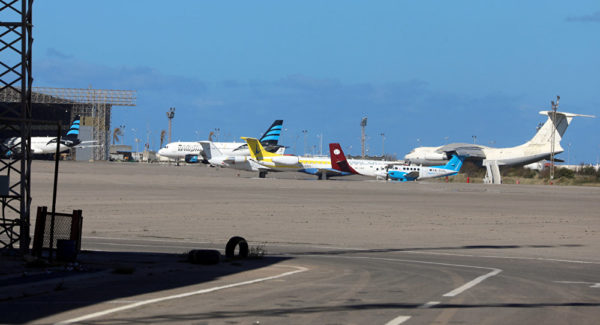 The Mitiga International Airport was partially reopened on Tuesday after the Monday airstrikes on it carried out by the Libyan National Army’s (LNA) headed by Field Marshal Khalifa Haftar, the Libyan Civil Aviation Authority said.
Share:

TRIPOLI/BENGHAZI, Libya (Reuters) – A warplane attacked Tripoli’s only functioning airport on Monday as eastern forces advancing on the Libyan capital disregarded international appeals for a truce in the latest of a cycle of warfare since Muammar Gaddafi’s fall in 2011.

Casualties were mounting in fighting that also threatens to disrupt oil supplies, fuel migration to Europe and wreck U.N. plans for an election to end rivalries between parallel administrations in the country’s east and west.

The eastern Libyan National Army (LNA) forces of Khalifa Haftar – a former general in Gaddafi’s army – said 19 of its soldiers died in recent days as they closed in on the internationally recognized government in Tripoli.

A spokesman for the Tripoli-based Health Ministry said fighting in the south of the capital had killed at least 25 people, including fighters and civilians, and wounded 80.

Mitiga airport, in an eastern suburb, was bombed and closed, authorities said. The U.N. envoy to Libya, Ghassan Salame, condemned the air strike as a “a serious violation of humanitarian law”.

A spokesman for the LNA confirmed the strike, saying his force had not targeted civilian planes, only a MiG parked at Mitiga.

The closure left Misrata airport, 200 km (125 miles) to the east down the coast, as the closest option for Tripoli residents.

Haftar’s LNA, which backs the eastern administration in Benghazi, took the oil-rich south of Libya earlier this year before advancing fast through largely unpopulated desert regions toward Tripoli.

Seizing the capital, however, is a much bigger challenge. The LNA has conducted air strikes on the south of the city as it seeks to advance along a road from a disused former international airport.

Witnesses said on Monday afternoon the LNA had lost control of the old airport and withdrawn from positions on the airport road. Forces allied to the Tripoli administration were seen inside the airport, while clashes with the eastern forces were raging south of the airport, a Reuters reporter at the scene and residents said.

On Sunday evening, LNA forces had moved up from the airport, coming as close as 11 km (7 miles) from the city center before retreating, residents said.

The government of Prime Minister Fayez al-Serraj, 59, is seeking to block the LNA with the help of allied armed groups who have rushed to Tripoli from Misrata in pickup trucks fitted with machine guns.

A Reuters correspondent in the city center could hear gunfire in the distance southwards.

Serraj has run Tripoli since 2016 as part of a U.N.-brokered deal boycotted by Haftar.

Dujarric said 3,400 people had been displaced by violence in and around Tripoli, emergency services had been blocked from reaching casualties and civilians, and electricity lines had been damaged.

“We’re calling for a temporary humanitarian truce to allow for the provision of emergency services and a voluntary passage of civilians, including those wounded, from the areas of conflict,” Dujarric said. The violence has jeopardized a U.N. plan for an April 14-16 conference to plan elections and end anarchy that has prevailed since the Western-backed toppling of Gaddafi.

As well as the United Nations, the European Union, United States and G7 bloc have all urged a ceasefire, a halt to Haftar’s advance and return to negotiations.

Haftar casts himself as a foe of extremism but is viewed by opponents as a new dictator in the mold of Gaddafi, whose four-decade rule was marked by torture, disappearances and assassinations.

Since NATO-backed rebels ousted Gaddafi, Libya has been a transit point for hundreds of thousands of migrants trekking across the Sahara in hope of reaching Europe across the sea.

Migrants and refugees held in detention are especially vulnerable in the current fighting, said aid agencies MSF (Doctors without Borders) and the International Rescue Committee.

The LNA says it has 85,000 men, but this includes soldiers paid by the central government that it hopes to inherit. Its elite Saiqa (Lightning) force, numbers some 3,500, while Haftar’s sons also have well-equipped troops, LNA sources say.

Analysts say Haftar has swelled his ranks with Salafist fighters and tribesmen as well as Chadians and Sudanese from over the southern borders, claims dismissed by the LNA.

France, which has close links to Haftar, said it had no prior warning of his push for Tripoli, a diplomatic source said.

When President Emmanuel Macron named Le Drian his foreign minister, Paris increased support for Haftar, in close alignment with Egypt and the United Arab Emirates, which see him as a bulwark against Islamists and have supported him militarily, according to U.N. reports.

France’s stance has created tensions with Italy, which has sought a leading role to end the turmoil in its former colony.