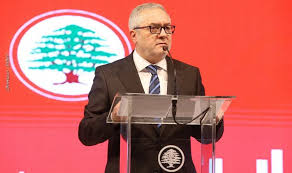 “He who is plotting against the LF’s share is showing greed and the obstacle has not been created by the LF but rather by he who is standing in the face of the LF,”    Abillama  said during a TV interview  in reference to Bassil  stressing that Prime Minister-designate (Saad) Hariri is the only one entitled to allocate ministerial posts  in coordination with the president “

“We are demanding the minimum and anything short of that would be a breach of (voters’) trust,” Abillama went on to say.

In an apparent reference to the FPM’s parliament bloc, Abillama  said “some are adding and subtracting MPs within blocs as if they are assembling ‘LEGO pieces ‘ to obtain ministerial posts.”

“Some forces are being undermined , including the LF, and they think that they can succeed, but this era is long gone and this issue is nonnegotiable,” Abillama said.

“I don’t advise anyone to try us,” he warned.

He also stressed that the Maarab Agreement “must be respected,” noting that “Bassil’s remarks on cabinet shares do not comply with the agreement’s text and spirit.”