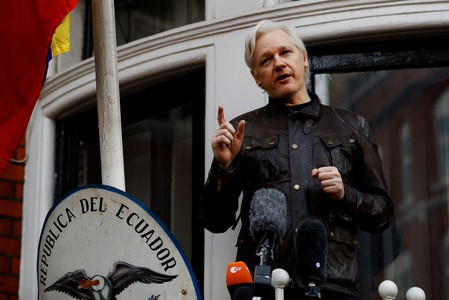 FILE PHOTO: WikiLeaks founder Julian Assange is seen on the balcony of the Ecuadorian Embassy in London, Britain, May 19, 2017. REUTERS/Peter Nicholls/File Photo
Share:

Ecuador has suspended WikiLeaks founder Julian Assange’s communication system after he discussed on social media issues that could damage the country’s diplomatic relations, the government said on Wednesday.

Assange has been living in Ecuador’s London embassy since June 2012, when he entered the building to avoid extradition to Sweden to face questioning about allegations of sex crimes, which he has always denied.

He recently spoke on social media about a diplomatic crisis between London and Moscow as well as about Catalonian separatism, despite warnings by Ecuador to avoid controversial political subjects.

“The measure was adopted in the face of Assange’s failure to comply with a written commitment he assumed with the government at the end of 2017, under which he was obliged not to issue messages that would interfere with other states,” Ecuador’s government said in a statement.

The statement did not say which communication system it had suspended. In 2016, Ecuador restricted Assange’s internet access for commenting on U.S. internal affairs.

But a source close to WikiLeaks said that the Ecuadorean government had “placed electronic jammers inside the embassy on Tuesday night to prevent Mr. Assange from tweeting, and communicating over phone and internet generally.”

The source said that the Ecuadorean government had also instructed embassy officials to refuse to allow visitors seeking to meet Assange to enter the embassy.

The source said that the Ecuadorean government had informed a lawyer for Assange that the WikiLeaks founder must stop tweeting about Catalonia and must erase a specific tweet Assange posted on the subject. But Assange refused to delete the tweet, the source added.

Ecuador’s President Lenin Moreno has described Assange as “a stone in our shoe” inherited from his predecessor and the government has said the situation is “unsustainable.” In December, Ecuador granted Assange citizenship.

The Swedish investigation was dropped last May, but Assange, who was free on bail at the time when he walked into the embassy, faces arrest by the British authorities for breaching his bail terms should he step outside the embassy grounds.

Assange says the real reason for his legal troubles is the fact that WikiLeaks published U.S. diplomatic and military secrets, and he fears that if he leaves, he risks being extradited to the United States.

British Foreign Office Minister Alan Duncan described Assange on Tuesday as a “miserable little worm,” who should leave the embassy and give himself up to British justice.