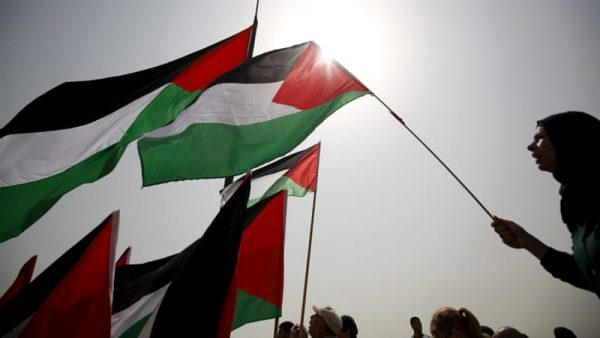 There has been no Palestinian presidential election since 2005 [Reuters]
Share:
Palestinian factions, including rival groups Hamas and Fatah, have agreed to hold a general election by the end of 2018, a joint statement by several groups said on Wednesday following talks in Cairo.

Hamas and Fatah signed a reconciliation deal in October in Cairo-backed talks after Hamas agreed to hand over administrative control of Gaza, including the key Rafah border crossing, a decade after seizing the enclave in a civil war.

The Palestinian groups in Cairo said they would defer the choice of a final date for the general election to Palestinian President Mahmoud Abbas.

The Western-backed mainstream Fatah party lost control of Gaza to Hamas, considered a terrorist group by many in the West and by Israel, in fighting in 2007. But last month Hamas agreed to cede powers in Gaza to Abbas’ Fatah-backed government in a deal mediated by Egypt.

Salah Al-Bardaweel, a Hamas official involved in the talks, called Wednesday’s agreement “vague” and expressed concern that it was unable to progress on key issues such as lifting sanctions imposed by Abbas and secure full opening of the crossing between Gaza and Egypt.

The talks also failed to address security responsibilities in Gaza, which have so far remained in the hands of Hamas-backed security services.

Abbas has said previously that upon assuming control of Gaza he would move to lift sanctions imposed on the impoverished enclave that have included power cuts and salary reductions of 30 percent to some 60,000 Gazans employed by his Palestinian Authority.

“We worked hard to reach practical results … such as opening crossings and lifting the sanctions and advancing the issue of reconciliation but unfortunately it did not happen,” said Bardaweel.

Azzam Al-Ahmed, head of Fatah’s delegation to the Cairo talks, said his group insisted Hamas completes full handover of Gaza control to the government by Dec 1. He added that another meeting with Hamas will be held later in December to evaluate further reconciliation steps.

Palestinian officials said Egypt is expected to send a security delegation to Gaza in the coming days to oversee the implementation of the agreement.