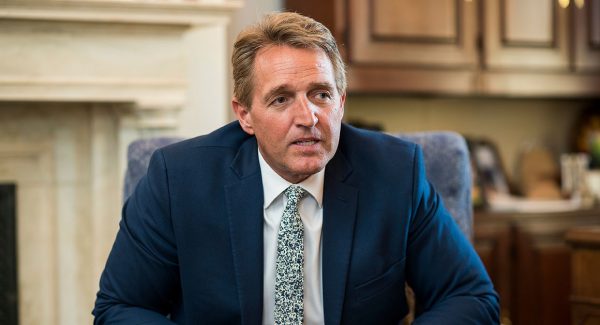 Embattled Sen. Jeff Flake (R-Ariz.) will retire after his current term expires, he announced on Tuesday in a decision that further roils a 2018 Senate landscape marked by multiple Republican retirements.

Flake was one of the most vulnerable Republican senators up for reelection next year. A vocal critic of President Donald Trump throughout and since the 2016 campaign, Flake said it became clear that the opposition would make it impossible for him to get through a Republican primary.

He took to the Senate floor to deliver a full-throated denunciation of Trump.

Condemning in a speech aimed at President Donald Trump the “flagrant disregard of truth and decency” that is undermining American democracy, Flake said, “There are times we must risk our careers. Now is such a time.”

Flake is a conservative who favors limited government and free markets.

“A political career does not mean much if we are complicit in undermining these values,” he said.

Trump’s Mental Health
Some Democrats are reaching out to renegade mental health experts, some of whom are getting into political organizing and campaign fundraising with the aim of removing Trump from office.

A member of the House Intelligence Committee is going where many of her colleagues have not: reaching out to people in the mental health field to talk about President Donald Trump.

“It’s one thing from my non-professional, non-clinical standpoint [to] believe that someone does not have the capacity to do the job, it’s another thing to talk to experts and [those] who can deal with mental psychosis on a daily basis, so I wanted to hear from them,” Rep. Jackie Speier, a California Democrat, told BuzzFeed News.

While many Democrats have steered clear of speculation about Trump, Speier appears not to be alone in talking to mental health professionals. Half a dozen lawmakers have contacted Bandy Lee, a psychiatry professor at Yale, to talk about the president’s mental state over the past several months, Lee told BuzzFeed News. Although Lee wouldn’t identify the politicians, she said they were Democrats in both the House and Senate.

Speier said she has not spoken with Lee, but that she reached out to two experts to discuss Trump’s mental health, including John Gartner, a psychologist. Gartner is the founder of Duty to Warn, a network of mental health experts across the country making a concerted push into politics and who appear to be circumventing their profession’s own rules about diagnosing public figures they have never evaluated themselves. (The traditional concept of a “duty to warn,” ingrained in law in most states, says mental health professionals who have reason to believe a patient may become dangerous or violent toward others must reveal that information, or else risk legal liability.)

Without having directly evaluated him, the group is arguing that the president, as Gartner put it recently, is “deeply and dangerously psychologically disordered.”

The roughly two dozen vocal mental health professionals involved in the group have drawn harsh criticism from others in the industry who argue that their statements have little clinical basis and risk casting their field in an unprofessional light and stigmatizing mental illness.

“The solution to Trump is not psychological name-calling, it’s political action,” Allen Frances, former chair of the department of psychiatry at Duke, told BuzzFeed News.

Lee, who was initially affiliated with Duty to Warn, told BuzzFeed News she has distanced herself from Gartner and disagrees with mental health experts diagnosing Trump and advocating for a political outcome.

The American Psychiatric Association, in a statement to BuzzFeed News, refuted “a common misconception” when asked about how Gartner’s group is now using the “duty to warn” concept. A “duty to warn,” the organization said, “does not apply if there is no physician-patient relationship.”

The Duty to Warn therapists have weighed in on several aspects of Trump’s personality and behavior from a distance. Based solely on his public behavior, the therapists have focused on what they view as Trump’s narcissistic personality disorder, though some have speculated that he could be a sociopath or have some form of dementia. The White House did not respond to request for comment about the therapists’ conjectures, though Trump’s doctor has previously hailed his health.

No doctor has given a first-hand account providing any sort of reason to think Trump has a psychological disorder. But the kind of speculation once limited to conspiracy theorists is now entering mainstream conversation, with questions about Trump’s mental state raised on cable news and Twitter.

Politicians have publicly joined in. Democratic Rep. Frederica Wilson said last week that the president “is a sick man,” following comments she said he made to the widow of a recently killed US soldier. And on Friday, billionaire Democratic donor and potential California Senate candidate Tom Steyer launched a nationwide TV ad campaign calling for Trump’s impeachment, asserting that he is “a clear and present danger who is mentally unstable.”

Gartner this month formed the 25th Amendment PAC, with the intention of supporting candidates willing to work to remove Trump from office. The constitutional amendment for which the PAC is named codifies the transition of power should the president no longer be able to serve, and provides a mechanism by which congressional leaders and a majority of the president’s cabinet could act in concert to rule the president unfit for office.

The hybrid PAC was only officially filed to the Federal Election Commission on Oct. 1 and there are no financial filings, making it difficult to gauge how successful the group’s fundraising has been, or how much it is spending. The PAC is set up so it can make donations directly to candidates but operate independently with activity like ads.

Gartner told BuzzFeed News the PAC has given $1,000 to Rep. Jamie Raskin, a progressive freshman Democrat from Maryland, who recently introduced legislation to create a commission that would determine whether the president can fulfill the duties of his office, a “body” the Constitution references in section four of the 25th Amendment. The legislation is an extreme longshot in the GOP-controlled Congress.

“We hope to be to the 25th Amendment what the NRA is to the 2nd,” Gartner recently said of the PAC.