“Trump is treason,” a protester yelled, threw Russian flags at the US Capitol 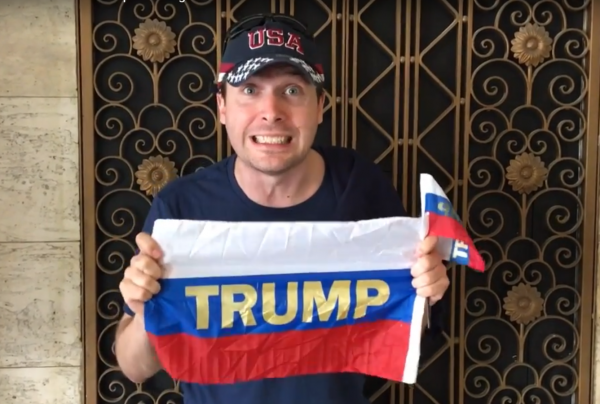 Share:
A protester managed to breach security at the US Capitol Building Tuesday as President Donald Trump arrived for a lunch with Republican Senators to talk tax reform.

The protester, who some reporters have identified as Ryan Clayton — the president of Americans Take Action — began yelling from within the press gaggle before throwing Russian flags on the floor as Trump passed.

“Trump is treason,” Clayton yelled. “This is not about tax reform!”

It is unclear how Clayton was able to make it into the press area–he would need valid press credentials in order to get past Capitol security.

“That’s a very unusual breach of decorum for us to experience here,” MSNBC’s Kasie Hunt said.

Andrea Mitchell confirmed, “the president was walking down the corridor right off the Senate floor on the second floor of the Capitol, one of the most secure places in Washington. We saw something we’ve never seen here before.”

Capitol police took hold of Clayton after he began yelling and escorted him away from the press gaggle. Clayton was previously kicked out of the 2017 Conservative Political Action Conference after he distributed Russian flags to attendees.Reporters noted that Clayton was also spotted with the press gaggle earlier this morning when Senator Bob Corker was being interviewed about president Donald Trump.

This same protester was caught standing behind @SenBobCorker during one of his media scrums this morning: pic.twitter.com/d5ev9aR4sI