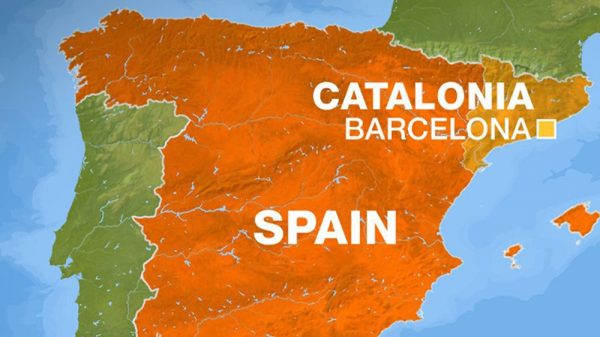 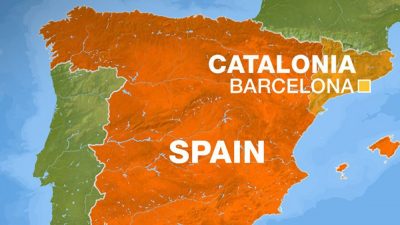 The regional government of Catalonia, one of the wealthiest regions of Spain, plans to hold a referendum on independence from Spain on Sunday. That’s a problem. Spain’s Constitutional Court has ruled that a regional government cannot call a referendum, because Spain’s constitution does not recognize the right to self-determination and establishes that sovereignty resides with Spanish citizens collectively.

Sunday’s referendum pits two competing claims of political legitimacy against one another. The Catalan government says that the Catalan people want a referendum, and the majority of the Catalan parliament supports it. The broader Spanish government insists that the referendum must not go forward because it goes against Spain’s democratic political institutions and its constitutional order. In this, it has the support of the majority of Spain’s parliament. Which will prevail?

The conflict between Catalonia’s regional government and Spain’s central government has been simmering for years.

Catalan nationalism has a long history. Nonetheless, after Spain’s transition to democracy in the mid-1970s, separatism had little support in Catalonia. The main Catalan nationalist party, Convergence and Union (CiU), defended Catalonia’s political autonomy within Spain. CiU negotiated and supported the 1978 democratic constitution and the 1979 Catalan statute of autonomy, which regulated the establishment of a Catalan government and its authority.

In 2006, a new Catalan autonomy statute was put into effect, enhancing Catalonia’s autonomy as a political region in Spain. Following the established process of approval in the Catalan and Spanish parliaments, Catalan votersbacked it in a referendum. But in 2010, Spain’s Constitutional Court declared some of its provisions unconstitutional. More than 1 million Catalans protested. Support for independence among Catalans jumped.

Meanwhile, the global economic crisis was racking Spain — and many Catalans thought that their fiscal contribution to Spain’s treasury was not being matched by the central government’s investments back into the region. In 2012, the Catalan government sought to renegotiate Catalonia’s fiscal regime, an idea that Spain’s center-right Popular Party government rejected.

That’s when the previously moderate CiU began to openly back a referendum on Catalan independence and secession. In 2015, the Catalan government called elections for the Catalan parliament, which pro-independence parties called a plebiscite on Catalan independence. The Democratic Convergence of Catalonia (the secessionist bloc of CiU), the Republican Left of Catalonia (ERC) and representatives of pro-independence civil society organizations ran together as an alliance called Junts pel Sí (Together for a Yes). The alliance won 40 percent of the vote and 46 percent of the seats in the Catalan parliament.

Because it didn’t win a majority, Junts pel Sí needed the support of a small secessionist, radical-left party to govern and reach a majority of 53 percent of seats. In exchange, the party demanded a referendum, even if the Spanish government didn’t agree to it.

The question of independence has come to a boil.

On Sept. 6, the Catalan parliament passed a Self-Determination Referendum Law that contradicts the Spanish constitution — and the Catalan government began preparing for the vote.

The Spanish government immediately filed an appeal with Spain’s Constitutional Court, which suspended both the law and the referendum on Sept. 7, pending a final ruling. And yet referendum preparations have been continuing.

Many polls in recent years show that 70 to 80 percent of Catalans support holding a referendum on Catalonia’s relationship with Spain. Support for independence has risen dramatically in the last decade, doubling to above 40 percent between 2010 and 2012, according to official Catalan government polling. Depending on the exact poll question, support for independence has ranged between 35 percent and 48 percent in recent years.

In other words, Catalans are divided. The government polling shows that support for a unilateral referendum — one that is not negotiated with the Spanish government — hovers down near 50 percent. Only the pro-independence parties voted to pass the Referendum Law. However, those who favor a referendum and independence are highly organized and mobilized; their civil society organizations quickly bring hundreds of thousands of people into the streets. Those who are opposed or indifferent are not similarly passionate or organized.

Spain is cracking down on these Catalan efforts.

Under court order, Spain’s Civil Guard arrested more than a dozen Catalan officials suspected of being involved in preparing for the referendum. More may yet be arrested. Police have searched Catalan government offices and seized ballots and other election materials. The media have been warned not to publicize the referendum, and referendum websites have been repeatedly shut down. To shield its members from hefty fines imposed by the Constitutional Court, the Catalan authorities disbanded the Electoral Board that had been appointed to oversee and certify the election, undercutting even the procedural guarantees established in the Referendum Law.

A prosecutor has placed the Catalan police under the control of the Spanish Interior Ministry, though only in operations to prevent the referendum. The Spanish government has increased its police presence in Catalonia. It has taken some control of the Catalan government’s finances, a move whose legality some jurists question. Thousands of Catalans have taken to the streets in protest, accusing the Spanish government of responding in ways that are repressive and authoritarian.

Nonetheless, the Catalan government remains determined to go forward. If the referendum takes place, independence supporters are likely to turn out in force, while opponents are expected to stay home. The yes vote on independence will likely win.

Efforts by the Spanish government and courts to prevent the referendum are ongoing. So far the central government has not applied Article 155 of the constitution, which would enable it to suspend one or more powers of a regional government. This would require a parliamentary debate and support from Spain’s Senate.

So what happens on Monday?