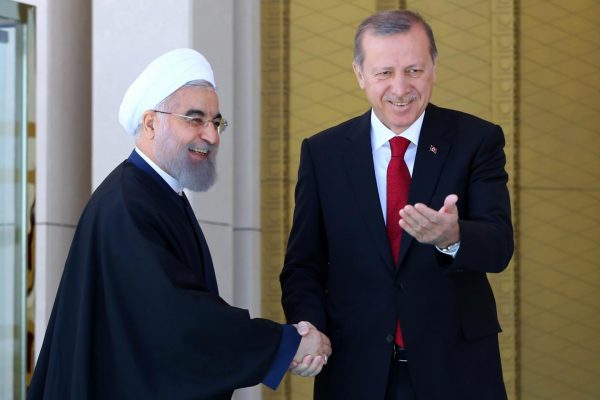 Traditional Middle East rivals Iran and Turkey have found themselves united of late by their mutual opposition to Kurdish independence in Iraq and common interest in ending the six-year war in Syria, among other leading issues in the region.

Iranian President Hassan Rouhani and Turkish President Recep Tayyip Erdogan spoke Sunday by phone, expressing major concerns a day before voting opened in the northern Kurdish autonomous region of neighboring Iraq. Monday’s referendum, in which the region’s residents are largely expected to ask for full independence from Baghdad, has been met with widespread criticism from Iraq’s central government, as well as from Iran and Turkey, which have battled insurgencies from their own local Kurdish populations and have taken countermeasures to quell potential instability the vote could bring.

“The two leaders noted that not canceling the referendum will bring with it chaos to the region and they also stressed the great importance which they attach to Iraq’s territorial integrity,” Erdogan’s office said in a statement, according to Reuters.

Turkey had already begun conducting military exercises near its border with Iraq’s majority-Kurd north and even said it launched an airstrike Saturday against militants from the Kurdistan Workers Party (PKK), who were preparing for an attack on Turkish troops from northern Iraq, Reuters reported. Erdogan threatened Monday to cut oil trade and send Turkish troops to invade the would-be Kurdish state, the Israeli daily Haaretz reported. As polls closed, Turkey and Iraq conducted “large-scale” joint military drills as a show of force, according to the Associated Press.

Shortly after, local media reported that Iran, too, may join the bilateral exercises. Iran launched its own military maneuvers Sunday to mark the 1980 invasion of Iran by the late Iraqi President Saddam Hussein and the subsequent eight-year war, according to Press TV, the English-language affiliate of the semi-official Islamic Republic of Iran Broadcasting outlet. The maneuvers have reportedly featured multiple airstrikes along Iraq’s border with Iran.

Iran also closed its border with Iraq’s Kurdish region Sunday and halted all flights there. While the intensity of Iran’s domestic Kurdish insurgency has never reached the level of Turkey’s, Iran also supports majority-Shiite Muslim Iraqi militias known collectively as the Popular Mobilization Forces, or Al-Hashd Al-Shaabi, whose influence and movement would likely be restricted as the result of an independent Kurdish state.

These fighters proved an effective force against the Islamic State militant group (ISIS) after the jihadists took over about half the country in 2014, and they even fought alongside Kurdish forces also battling ISIS. The militias are deeply opposed, however, to an Iraq divided between Iraqi Prime Minister Haider al-Abadi—an ally of both the U.S. and Iran—in Baghdad and Kurdish Regional Government President Masoud Barzani in Erbil, whose only steady international support has come from Israel, further offending local actors.

These Iran-backed militias retain a presence in disputed areas such as Kirkuk, whose inclusion in Monday’s referendum has made the move even more controversial. As tensions brewed in the days leading up to the referendum, Qais al-Khazali, head of the Popular Mobilization Forces unit Asaib Ahl al-Haq, spoke out against the possibility of a Kurdish state.

“The enemies of Imam Hussein raised the flag of the homosexuals in Erbil at the wishes of the Israelis,” Khazali said Saturday, referencing the seventh-century Islamic figure highly revered by Shiite Muslims for his refusal to pledge allegiance to the Umayyad caliphate, which he considered unjust and illegitimate.

“We will be victorious over anyone who wants to hurt or divide Iraq,” he added, in a speech excerpt provided to Newsweek by Ahmad Majidyar, director of the Middle East Institute’s IranObserved Project.

Iran and Turkey have also increasingly coordinated across the border in Syria, where they back opposing sides in a conflict that’s killed hundreds of thousands of people and displaced millions. Iran, along with Russia, is a supporter of Syrian President Bashar al-Assad, while Turkey backs rebels trying to overthrow him since 2011. Opposition forces, with help from the U.S. and Gulf Arab states as well, made major gains early on in the war, but Assad and his allies have since regained much of what was lost.

A series of Syrian government victories and a rise in jihadist influence among rebel groups alienated international backers from the Syrian opposition and, as the Syrian military took Aleppo late last year, Turkey was forced to come to the table and make a deal with Russia and Iran. These negotiations, based in Astana, have since produced a framework for four de-escalation zones designed to provide refuge for civilians.

As Erdogan wrapped up a trip to Moscow to discuss Syria with Russian President Vladimir Putin, Turkish Prime Minister Binali Yildirim announced Monday that Turkey, Iran and Russia would work together to create a new de-escalation zone near the northern city of Afrin, which is under the control of the U.S.-backed Syrian Democratic Forces, a mostly Kurdish alliance of Arabs and ethnic minorities planning their own push for greater autonomy. U.S. support for Kurds, especially in Syria, has angered Turkey, a NATO partner.

“We are now taking joint moves with Iran and Russia to establish a de-escalation zone in the area of the Syrian city of Afrin in the north of the country,” Yildirim said, according to the state-run Tass Russian News Agency.

A map shows areas of control in Syria between August 30, 2017 and September 14, 2017. The Syrian military, backed by Russia and Iran, has retaken large swaths of territory once held by the Islamic State militant group (ISIS) and other insurgents, some of which received Turkish support. INSTITUTE FOR THE STUDY OF WAR/REUTERS

Iran and Turkey have united against a third foe, Saudi Arabia. Persian Gulf rivals Iran and Saudi Arabia have been engaged in a proxy war throughout the region for decades. Saudi Arabia cut off relations with Iran completely early last year after Iranian demonstrators outraged by Riyadh’s execution of an influential Shiite Muslim cleric stormed the Saudi Arabian embassy in Iran. It was when Saudi Arabia severed ties with neighboring Qatar earlier this year, however, that Turkey stepped in.

Shortly after President Donald Trump returned from an anti-Iran rally in the oil-rich kingdom, Saudi Arabia and allies Bahrain, Egypt and the United Arab Emirates announced in June a total boycott of Qatar over alleged ties to both Shiite Muslim groups tied to Iran and ultraconservative Sunni Muslim groups. Qatar denied the charges, leading Turkey and Iran to defy the Saudi-led blockade to deliver aid. Turkey also held military exercises on its only foreign military base, located in Qatar.