US sanctions could throw Venezuela back to the stone ages, report 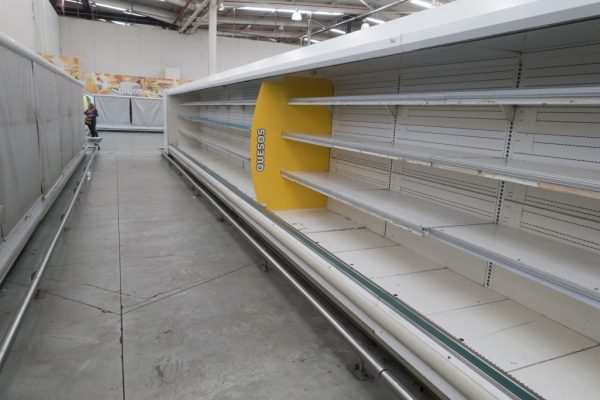 Empty refrigerator shelves are pictured at a Makro supermarket in Caracas, Venezuela, August 4, 2015. Venezuelan supermarkets are increasingly being targeted by looters, as swollen lines and prolonged food shortages spark frustration in the OPEC nation struggling with an economic crisis. Photo by Carlos Garcia Rawlins/Reuters
Share:

CARACAS, Venezuela – A small army of red-shirted workers mop the linoleum floors as their supervisors, sitting under a giant portrait of Hugo Chavez, look on. By the meltdown standards of Venezuela’s economy, the shelves around the workers at the state-run Bicentenario supermarket in eastern Caracas are brimming with staples like rice and pasta.

What’s missing are the shoppers: They’ve been scared off by prices that double every few weeks while wages in the crisis-wracked nation remain stagnant.

“I don’t even look at my paycheck anymore because it just gets me depressed,” said Norma Pena, a bank teller who earns a little more than Venezuela’s minimum wage of around just $15 a month. She left the store with a single bag of black beans.

While President Nicolas Maduro celebrates having calmed Venezuela’s streets after months of deadly protests, the country’s imploding economy poses an ever more severe threat. And the misery is likely to get even worse due to financial sanctions imposed by the Trump administration in efforts to isolate Maduro for taking the country down an increasingly authoritarian path.

Even before the sanctions were announced, most Venezuelans were struggling like never before. Since 2014, the year after Maduro took office, the economy has shrunk 35 percent – more than the U.S. did during the Great Depression.

A bevy of foreign airlines have pulled out of the country this year, oil production is at the lowest level in more than two decades and the government had to add three zeros to its bills as the value of its currency – the “strong bolivar” – plummeted.

But while daylong bread lines have eased, the newest scourge is the way galloping inflation has reached even the basic staples whose prices were long controlled by rigid price and currency restrictions.

In recent months authorities have started allowing companies to import everything from canned food to new cars and letting them pass the dollar prices on to consumers at the black market exchange rate, where the greenback is worth 1,685 times more bolivars than it as at the strongest of three official exchange rates. In the past, merchants risked having goods seized, or their businesses shut down, if bolivar prices reflected the world market prices.

The result of the de-facto dollarization has been a devil’s bargain: Shelves are fuller than Venezuela has seen for months, but with prices that are out of reach for the vast majority of poor Venezuelans. Inflation, which has been running in the triple digits for more than two years, hit a record last month and has risen to 650 percent over the past 12 months, according to an estimate by New York-based Torino Capital.

Venezuelans have made a grim joke of the process. The government once boasted of guaranteeing a “precio justo” – or “just price” – for goods. Buyers report there is now more on offer but only at a “precio susto” – a “scary price.”

That’s not to say shortages have gone away. The Bicentenario supermarket hasn’t seen any fish or meat in about a year, partly because the freezer section’s cooling system broke and no spare parts can be found. Most shelves contain a single variety of any given product, much of it imported from China. Private supermarkets aren’t much better stocked.

Pena says she scrapes by selling items – telephones, clothes, once even a washing machine – left behind by better-off clients who have abandoned Venezuela. If she and her husband didn’t already own their home, they wouldn’t have enough to feed their two daughters, she said. Even so, she’s lost 6 kilograms (13 pounds) as a result of what’s come to be known as the “Maduro diet.” In the past year, 74 percent of the population has lost weight because of food scarcity, according to a recent study by three of Caracas’ largest universities.

At the normally bustling outdoor Chacao market, poultry vendor Juan Dulcey said his middle-class clientele fell by half over the past month because he has had to double prices to make up for skyrocketing costs. A kilogram of boneless breasts costs around 27,300 bolivars per kilogram – about 10 percent of the current monthly minimum wage.

“We used to have a lot of fun joking with customers, but now everyone seems very sad,” Dulcey said.

The government accuses U.S. President Donald Trump and the opposition, which has backed the sanctions, of trying to oust Maduro through an “economic war.” Former Foreign Minister Delcy Rodriguez, leader of the pro-government constitutional assembly whose creation triggered the U.S. action, said Sunday that the “financial blockade” means Venezuela won’t be able to pay for essential imports like food and medicine.

The Trump administration denies it is seeking to punish ordinary Venezuelans. The sanctions, enacted by executive order last week, prohibit American banks from providing new money to the government or state-run oil company PDVSA. They also bar PDVSA’s U.S. subsidiary, Citgo, from sending dividends back to Venezuela. But they don’t affect financing for most commercial trade, including the shipment of crude oil, of which the U.S. is the OPEC nation’s biggest buyer.

Still, by depriving Maduro of badly needed hard currency, the sanctions make it more likely that Venezuela will stop payment on its debt, or reduce what few goods it still imports at the official rates. The government and PDVSA have around $4 billion in debt coming due before the end of the year but only $9.7 billion in foreign currency reserves, the vast majority in the form of gold ingots that are hard to exchange quickly for cash.

Worse, if Maduro doesn’t yield to Trump’s demand to disband the constitutional assembly and call elections, even tougher sanctions are likely to follow. To cope, Maduro says he will look to increase commercial ties with China and Russia, although it’s not clear how generous its allies will be, given Venezuela’s growing reputation as an international outlaw in the mold of Cuba, Syria and North Korea.

“This could really reduce them to a barter economy and throw Venezuela back to the stone ages,” said Russ Dallen, a managing partner at investment bank Caracas Capital Markets. “It’s both fascinating and terrifying to watch.”