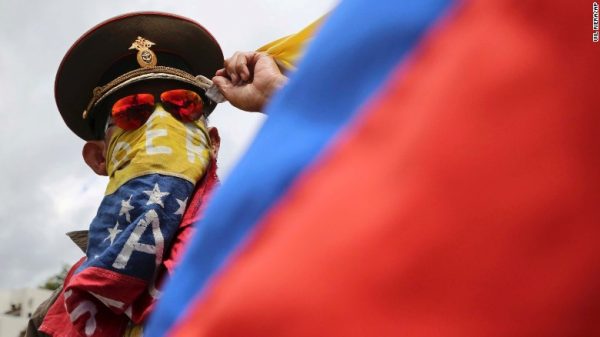 The United Nations slammed Venezuela on Tuesday for the use of excessive force against anti-government protesters and said security forces and pro-government groups were believed responsible for the deaths of at least 73 demonstrators since April.

Abuses of protesters, including torture, were part of “the breakdown of the rule of law” in the South American OPEC member country,” U.N. High Commissioner for Human Rights Zeid Ra’ad al-Hussein said in a statement.

“The responsibility for the human rights violations we are recording lies at the highest levels of the Government,” he said.

There was no immediate reaction from Venezuela’s leftist government to the scathing criticism from the U.N., which said preliminary findings from an investigation conducted in June and July “paint a picture of widespread and systematic use of excessive force and arbitrary detentions against demonstrators in Venezuela.”

But the government has increasingly turned a blind eye to critics overseas as it steps up a crackdown on street protests against President Nicolas Maduro and seeks to consolidate his leftist rule.

As part of that effort, the nation’s pro-government Supreme Court sentenced an opposition mayor to 15 months in jail on Tuesday, saying he had defied an order to ensure that protests in his district of the capital Caracas did not disrupt transit through the area.

In addition to ordering the immediate arrest of Ramon Muchacho of Chacao, a wealthy district that has been the epicenter of four months of protests, the court said he had been fired.

“We are being condemned for doing our job, for guaranteeing the legitimate right to peaceful protest and the right of all Venezuelans to exercise their civil and political rights,” Muchacho said in an email message on Tuesday to his supporters. “The coming hours will be difficult for me.”

Muchacho had not attended court hearings related to his case and location was unknown as of Tuesday afternoon. The order to jail him came just days after the installation of Venezuela’s new constituent assembly, an all-powerful legislative body run by Maduro’s Socialist Party loyalists.

The Supreme Court has issued injunctions against nearly a dozen mayors of opposition municipalities ordering them to prevent protesters from erecting barricades blocking streets and to remove them if they were put in place.

Critics say such cases are a violation of due process rights carried out by a Supreme Court that has ruled almost universally in favor of the Socialist Party.

The court is hearing a similar case against the mayor of another Caracas district, David Smolansky of El Hatillo. Intelligence agents last month arrested Alfredo Ramos, the mayor of the city of Barquisimeto, on accusations that he violated the same order.

Maduro has promised the assembly will bring peace to the country, and help end an acute economic crisis marked by shortages of food and other basic goods, but the opposition says it is aimed at consolidating a dictatorship.

The U.N. said a full report on its finding about Venezuela would be issued at the end of this month. But according to the preliminary findings, Venezuela’s security forces were allegedly responsible for the deaths of at least 46 protesters between April and July 31 while pro-government armed groups known as “colectivos” were linked to 27.

“It is unclear who the perpetrators in the remaining deaths may be,” it said.

“While no official data is available on the number of detentions, reliable estimates suggest that between April 1, when the mass demonstrations began, and 31 July, more than 5,051 people have been arbitrarily detained. More than 1,000 reportedly remain in detention,” the U.N. statement said.