Venezuela could be on the brink of a civil war 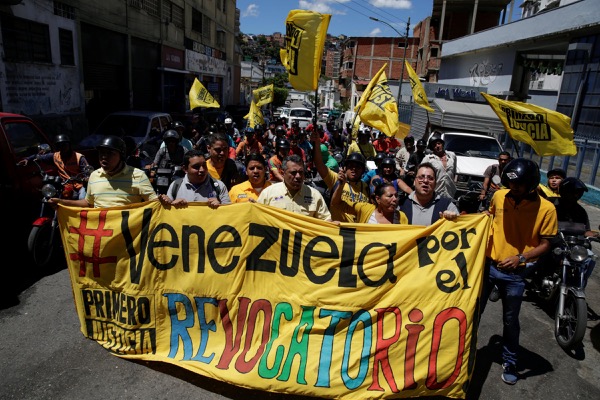 Venezuelan authorities arrested seven men over the weekend whom they claimed took part in an attack on a military base outside of Valencia, the country’s third-largest city. The strike took place after a video made the rounds on social media Sunday featuring men in military fatigues calling for a rebellion against Maduro.

“The significance lies in whether this suggests that Maduro is losing his grip on the military and whether we can expect to see more mutinies to come, or if this is just an isolated incident,” Stuart Culverhouse, global head of macro and fixed income research at Exotix Capital, said in an email.

“Maintaining the support of the military is a key factor in Maduro’s survival, and many in the military will have a vested interest in ensuring (his) survival,” Culverhouse said.

Venezuela’s top-ranking military officials have benefited greatly from Maduro’s government. They hold influential roles and have received considerable financial sums in exchange for their loyalty to Maduro. But experts say that support is waning as the country’s economic and social conditions continue to deteriorate.

As support for Maduro dwindles, the chances of a civil war increase.

Reggie Thompson, Latin America analyst at Stratfor, said it isn’t clear whether the attack was carried out with “military collusion,” but if it was, “that could be a problem” for the Venezuelan government.

High-ranking members of the military are more likely to remain loyal to Maduro, but there could be further instances of attrition along the lower ranks, he said. “The lower you get in the ranks, the more likely the crisis will impact the lives of these people’s families.”

The Venezuelan government claims that both soldiers and civilians were involved in the attack on the base, which killed two people. Venezuelan authorities say they are hunting 10 of the attackers, who escaped with a cache of weapons.

Venezuelans have struggled for almost two years with a crushing shortage of food, medicine and other basic goods. The country has been decimated by a crash in oil prices. Venezuela’s economy is almost entirely dependent on its oil industry, which accounts for 95 percent of exports.

Thompson also said military loyalty is critical in order for the National Constituent Assembly (ANC) to rewrite the constitution. The ANC is a new legislative body that was created late last month in a vote marred by fraud allegations; it comprises mostly Maduro loyalists and supersedes the country’s popularly elected, opposition-led National Assembly.

“Venezuela has entered a new phase of instability” after the ANC election, said Monica de Bolle, senior fellow at the Peterson Institute for International Economics. “There are segments of the military that do not like the way the Maduro regime has handled things.”

Ortega came into Maduro’s crosshairs after condemning the government’s use of force against anti-government protesters. Those protests have gone on for more than four months, killing more than 100 people.