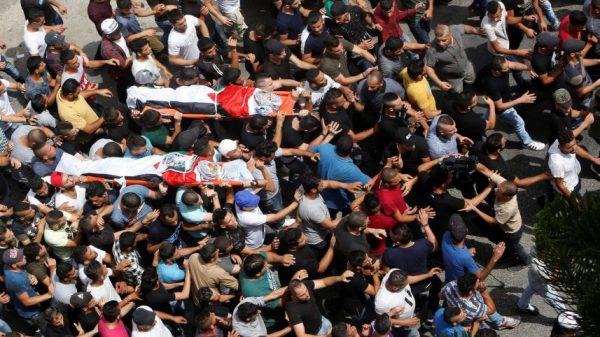 Palestinian mourners carry the bodies of Mohammed Salah Os Salameh during their funeral in the occupied West Bank city of Jenin, July 12, 2017. Mohammed Salah, 21, and Os Salameh, 16. Were killed by Israeli troops during a raid at their refugee camp Salah sustained bullet wounds to his chest and stomach and died at the scene, said Palestinian sources.
Share:

The incident took place before dawn in Jenin refugee camp, and no Israeli casualties were reported.

“During an IDF (Israel Defence Forces) operation in the Jenin refugee camp, Palestinian gunmen opened fire at the forces and assailants hurled explosive devices at the forces,” the Israeli  military claimed  in a statement.

“In response to the immediate threat, forces shot towards the attackers.”

The Palestinian health ministry said the two Palestinians killed by the troops were aged 21 and 16, and that a third person was shot and wounded in the leg.

Camp residents made no mention of any Palestinian gunfire in their accounts of the raid in which they said rocks were thrown at the troops.

Mohammed Sadee, who lives in the camp, said he witnessed one of the Palestinians being shot.

“The military jeeps were driving in and this martyr was behind them on a motorbike. They shot him … and he fell to the ground,” he said.