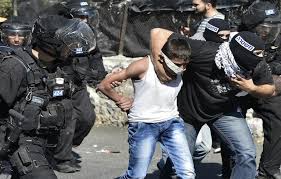 Israeli police spokesperson Luba al-Samri said that during an overnight raid in Shufat refugee camp in northern Jerusalem, Israeli police searched at least one house, and seized an unspecified quantity of ammunition.

She said a motorcycle that had been reported stolen in Jerusalem a number of weeks ago was also found in the camp, and that an unspecified number of suspects were detained and taken in for interrogation.

An Israeli army spokesperson told Ma’an that 21 Palestinians were detained in military raids carried out across the occupied West Bank.

During a raid into Jenin refugee camp in the northern West Bank — that resulted in no detentions — two Palestinians, a 17 year old and a 20 year old, were shot dead by Israeli soldiers.

Also in the north, Israeli forces raided multiple areas in the Nablus district. According to the Israeli army, two Palestinians were detained in Balata refugee camp — one of whom was a “Hamas operative,” and another alleged Hamas operative was detained in Iraq Burin, the army spokesperson said.

Israeli raids in Palestinian towns, villages, and refugee camps are a daily occurrence in the occupied West Bank, including East Jerusalem.

Due to the typically aggressive nature of the raids, clashes often erupt between local Palestinian youth who throw stones and are met in response with live fire, rubber-coated steel bullets, and tear gas, often resulting in serious, sometimes fatal injuries.

According to Palestinian prisoners’ rights group Addameer, there were 6,200 Palestinians held in Israeli prisons as of May, include 300 minors.
MNA