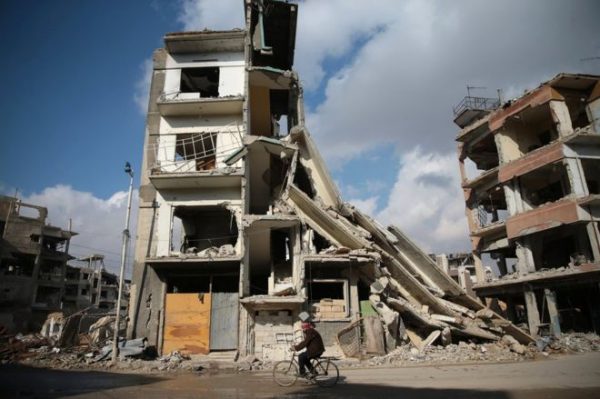 BEIRUT (Reuters) – Clashes, shelling and air raids in western Syria marred a Russian- and Turkish-backed ceasefire that aims to end nearly six years of war and lead to peace talks between rebels and a government emboldened by recent battlefield success.

Russian President Vladimir Putin, a key ally of Syrian President Bashar al-Assad, announced the ceasefire on Thursday after forging the agreement with Turkey, a longtime backer of the opposition.

The truce went into force at midnight but monitors and rebels reported almost immediate clashes, and violence appeared to escalate later on Friday as warplanes bombed areas in the country’s northwest, they said.

Asaad Hanna, a political officer in the Free Syrian Army (FSA), a loose alliance of insurgent groups, told Reuters violence had reduced but had not stopped.

“We cannot be optimistic about someone like the Russians who used to kill us for six years … they are not angels. But we are happy because we are reducing the violence and working to find a solution for the current situation,” said Hanna.

The ceasefire is meant as a first step towards fresh peace talks, after several failed international efforts this year to halt the conflict, which began as a peaceful uprising and descended into war in 2011.

It has resulted in more than 300,000 deaths, displaced more than 11 million people and drawn in the military involvement of world and regional powers, including Moscow and Ankara.

The agreement brokered by Russia and Turkey, which said they will guarantee the truce, is the first of three ceasefire deals this year not to involve the United States or United Nations.

Moscow is keen to push ahead with peace talks, hosted by its ally Kazakhstan. But the first challenge will be maintaining the truce, which looked shaky on Friday.

Syrian government warplanes carried out nearly 20 raids against rebels in several towns along the provincial boundary between Idlib and Hama, the Syrian Observatory for Human Rights said. Clashes between rebel groups and government forces took place overnight in the area, the Observatory and rebel officials said.

There was no immediate comment from the Syrian military on Friday’s clashes.

Residents of several rebel-held areas, including towns and cities in Idlib province, used the relative calm to hold street protests against the Syrian government on Friday, the Observatory said.

A number of rebel groups have signed the new agreement, Russia’s Defence Ministry said on Thursday. Several rebel officials acknowledged the deal, and a FSA spokesman said it would abide by the truce.

Hanna, the FSA political officer, said late on Friday rebels were not yet responding to attacks by pro-government forces and had asked Turkey to make sure the attacks stop.

“If the breaks come again, we will reply to all the sources of fire. We are monitoring the fighting but our weapons are ready,” he said.

The previous two Syria ceasefires, brokered by Washington and Moscow, took effect in February and September but both collapsed within weeks as warring sides accused each other of truce violations and fighting intensified.

The Syrian government will be negotiating from a strong position after its army and their allies, including Shi’ite militias supported by Iran, along with Russian air power, routed rebels in their last major urban stronghold of Aleppo this month.

Moscow’s air campaign since September last year has turned the war in Assad’s favour, and the last rebels left Aleppo for areas that are still under rebel control to the west of the city, including the province of Idlib.

On Friday the Russian ambassador to the United Nations said Moscow had circulated a proposed resolution at the U.N. Security Council that would endorse the ceasefire, and said he hoped the council would vote on the resolution on Saturday.

In another sign that the latest truce could be as challenging to maintain as its predecessors, there was confusion over which rebel groups would be covered by the ceasefire.

The Syrian army said the agreement did not include the radical Islamist group Islamic State, fighters from al-Qaeda’s former branch the Nusra Front, or any factions linked to those jihadist groups.

But several rebel officials said on Thursday that the agreement did include the former Nusra Front – now known as Jabhat Fateh al-Sham – which announced in July that it was severing ties with al Qaeda.

A spokesman for Jabhat Fateh al-Sham criticized the ceasefire for not mentioning Assad’s fate, and said the political solution under this agreement would “reproduce the criminal regime”.

“The solution is to topple the criminal regime militarily,” he said in a statement on Friday.

The powerful Islamist insurgent group Ahrar al-Sham said it had not signed the ceasefire agreement because of “reservations” but did not elaborate.

The deal follows a thaw in ties between Russia and Turkey.

Ankara backs rebels fighting against Islamic State, which has made enemies of all other sides involved in the conflict.

In a sign of the detente, the Turkish armed forces said on Friday Russian aircraft had carried out three air strikes against Islamic State in the area of al-Bab in northern Syria.

Ankara has insisted on the departure of Assad but his removal has become a secondary concern to fighting the expansion of Kurdish influence in northern Syria. The chances of Assad’s opponents forcing him from power now seem more remote than at any point in the war.

Turkish demands that fighters from the Lebanese Hezbollah movement leave Syria may not please Iran, another major Assad supporter. Hezbollah has been fighting alongside Syrian government forces against rebels.

On Thursday a senior Hezbollah official said the party’s military wing would remain in Syria.

The United States, in the waning days of U.S. President Barack Obama’s administration, has been sidelined in recent negotiations and is not due take part in the Kazakhstan talks.

Russia has said the United States could join a fresh peace process once President-elect Donald Trump takes office on Jan. 20. It also wants Egypt to join, together with Saudi Arabia, Qatar, Iraq, Jordan and the United Nations.

Trump has said he would cooperate more closely with Russia to fight terrorism but it was unclear what that policy would look like, given resistance from the Pentagon and the U.S. intelligence community to closer cooperation with Russia on Syria.