Lebanon finally has a functioning government. Hariri’s cabinet gets 87 out of 92 votes 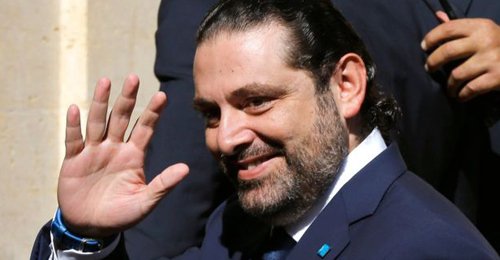 Lebanon’s new prime minister, Saad al-Hariri, won the parliaments vote of confidence for his government following a vote on Wednesday, with 87 deputies voting in favour out of the 92 that attended

Four MPs voted against. The only abstention came by way of Emad al-Hout, the sole deputy for the Jamaa Islamiyya party, which is seen as Lebanon’s branch of the Muslim Brotherhood.

Of Lebanon’s 126 deputies, 34 did not show up for the confidence vote – with a few notable personalities among them.

One absentee was Walid Jumblatt, the veteran leader of the largely Druze Progressive Socialist Party, and son of Kamal Jumblatt, a major figure in the country during the Lebanese civil war who led anti-government forces that opposed Syria’s intervention in the country.

The Druze make up around 8 percent of Lebanon’s religiously diverse population.

Another absentee was the head of the Maronite Christian Marada Movement, Suleiman Frangieh Jr, a childhood friend of Syrian President Bashar al-Assad, and grandson of Lebanon’s former president and warlord Suleiman Frangieh.

Both Jumblatt and Frangieh Jr’s parties have ministers in Hariri’s government.

Hariri is himself the son of former slain Lebanese Prime Minister Rafik Hariri, who was assassinated in 2005, in an attack widely believed to be by Hezbollah and Iranian backed pro-Syrian militant in Lebanon. 5 members of Hezbollah are being tried b a UN backed court for Hariri’s assassination. Reflecting Lebanon’s fragile stability, the Lebanese army reported an explosion on Wednesday morning that killed a local official in al-Ain, a town in the northern Bekaa valley region.

“Around 6:30 this morning, a bomb exploded in a car type van in Al-Ain town – Baalbek, with deputy municipality head, Khalid Ali Al-Houri, on board, accompanied by Mahmoud Kassem Al-Houri,” read an army statement carried by Lebanon’s National News Agency.

“The explosion killed the former and severely injured the latter who was transferred to a nearby hospital for treatment,” said the statement. The army imposed a security cordon around the site, while the military police took over the investigation into the incident.

It took nearly two and a half years for Lebanon to elect President Michel Aoun, whose position is reserved for Maronite Christians, and 48 days for Hariri to form a government to put forward to parliament.

The vote took place after a brief debate in parliament, where deputies raised questions about the government’s policy statements and Hariri’s response.

Hariri stressed that the government will follow up on the issue of military prisoners in order to return [them] to their families.”

The Lebanese prime minister, whose position is reserved for Sunnis in Lebanon’s sectarian power-sharing model, also spoke of “the need for the adoption of a new parliamentary electoral law.”

Hariri also said he would pursue a gender quota in parliament to rebalance the composition of the male-dominated assembly.

Commitment to Special Tribunal for Lebanon

Hariri also raised the issue of the Lebanon’s commitment to applying Lebanese criminal law to the international tribunal, Special Tribunal for Lebanon , investigating and prosecuting those responsible for the assassination of his father.

Hariri said it was paramount Lebanon remain part of the tribunal, which was established in 2009, as it was “set up on the principle of achieving justice”.

With regards to the oil sector, Hariri said the government would issue a series of decrees regarding private sector regulation, taxes, licensing – as well as setting up a sovereign wealth fund for the first time.

On the hot-button issues of accountability and corruption, Hariri said his government would strengthen judicial independence and that for the first time there will be an anti-corruption minister.

He added, however, that “the reality of fighting corruption requires the state machinery and an end to relying on paper and pens.”

Hariri said that “Lebanon would not be governed except through consensus, and this issue is not subject to regional equations but the risks that we have taken as political parties to come together.”

Parliament debate
The vote was supposed to take place on Tuesday, but Parliament Speaker Nabih Berri, whose position is reserved for the Muslim Shiites, delayed it by a day to ensure the largest possible attendance of deputies.

Parliament did have a brief debate yesterday however.

Although the debate was meant to discuss the granting of parliamentary confidence in Hariri’s government, a spat between two Lebanese deputies went viral on Arabic social media.

Khaled al-Daher and Riyad Rahal crossed swords, a not uncommon event in Lebanon’s raucous parliament, with the latter saying al-Daher was bitter about not getting a ministerial post.

Curses and insults were thrown in an exchange filmed and uploaded to YouTube – with an aggrieved al-Daher at one point saying “screw you, stupid!”