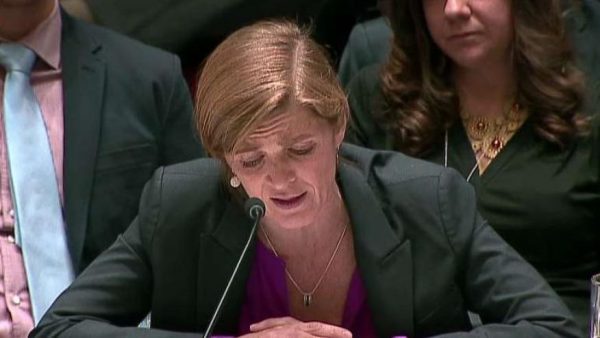 Samantha Power, United States Ambassador to the United Nations. US abstained in key Israel vote, clearing way for condemnation of Israeli settlements in the West Bank
Share:
The Obama administration on Friday mustered the courage to allow the U.N. Security Council to adopt a resolution demanding an end to Israeli settlements, defying pressure from President-elect Donald Trump, Israel and some U.S. lawmakers who urged Washington to wield its veto.

An abstention by the United States paved the way for the 15-member international body to approve the resolution, with 14 votes in favor, prompting applause in the council chamber.

“Israel rejects this shameful anti-Israel resolution at the U.N. and will not abide by its terms,” the office of Prime Minister Benjamin Netanyahu, who has encouraged the expansion of Jewish settlements in land captured by Israel in a 1967 war with its Arab neighbors, said in a statement.

“Day of victory”
The U.N. Security Council vote to adopt a resolution demanding an end to Israeli settlements marks “a day of victory,” a senior Palestinian official said on Friday.

“This is a day of victory for international law, a victory for civilized language and negotiation and a total rejection of extremist forces in Israel,” Chief Palestinian Negotiator Saeb Erekat told Reuters.

“The international community has told the people of Israel that the way to security and peace is not going to be done through occupation … but rather through peace, ending the occupation and establishing a Palestinian state to live side by side with the state of Israel on the 1967 line,” Erekat said.


The Obama administration’s action broke with the long-standing American approach of shielding Israel, Washington’s long-time ally that receives more than $3 billion in annual U.S. military aid, from such action. The United States, along with Russia, France, Britain and China, has veto power on the council.

The resolution, put forward by New Zealand, Malaysia, Venezuela and Senegal a day after Egypt withdrew it under pressure from Israel and Trump, was the first adopted by the council on Israel and the Palestinians in nearly eight years.

The U.S. abstention was seen as a parting shot by outgoing President Barack Obama, who has had an acrimonious relationship with Netanyahu and whose efforts to forge a peace agreement based on a “two-state” solution of creating a Palestinian state existing peacefully alongside Israel have proven futile. His administration has argued that continued Israeli settlement building has undermined chances of a peace deal.

Israel and Trump had called on the Obama administration to veto the measure. Trump wrote on Twitter after the vote, “As to the U.N., things will be different after Jan. 20th,” referring to the day he succeeds Obama.

The Palestinians want an independent state in the West Bank, Gaza and East Jerusalem.

The resolution demanded that Israel “immediately and completely cease all settlement activities in the occupied Palestinian territory, including East Jerusalem” and said the establishment of settlements by Israel has “no legal validity and constitutes a flagrant violation under international law.”

After the vote, the White House defended the U.S. abstention, saying that in the absence of any meaningful peace process, Obama took the decision to abstain. Criticizing Israel’s settlement policy, it said it had repeatedly warned Israel privately and publicly that settlement activity was increasing Israel’s international isolation.

“We could not in good conscience veto a resolution that expressed concerns about the very trends that are eroding the foundation for a two-state solution,” Rhodes told a conference call.

Samantha Power, the U.S. ambassador to the United Nations, said the United States did not raise a veto because the resolution “reflects the facts on the ground and is consistent with U.S. policy across Republican and Democratic administrations.”

The passage of the resolution was more than merely symbolic. It formally enshrined the international community’s disapproval of Israeli settlement building and could spur further Palestinian moves against Israel in international forums.

The U.N. action was “a big blow to Israeli policy, a unanimous international condemnation of settlements and a strong support for the two-state solution,” a spokesman for Palestinian President Mahmoud Abbas said in a statement published by the official Palestinian news agency Wafa.

Israel’s U.N. ambassador, Danny Danon, called the resolution disgraceful, adding he had no doubt the incoming Trump administration and Ban’s successor as U.N. chief, former Portuguese Prime Minister Antonio Guterres, “will usher in a new era in terms of the U.N.’s relationship with Israel”

Israel has said the final status of the Jewish settlements should be determined in talks on Palestinian statehood. The last round of U.S.-led peace talks between the Israelis and Palestinians collapsed in 2014.

Trump, who called for a veto along with Netanyahu, is likely to be a more staunch supporter of Netanyahu’s right-wing policies. He named a hardline pro-Israel ambassador and vowed to move the U.S. Embassy from Tel Aviv to Jerusalem.

After this vote Israel has automatically and officially become an occupier by force of another UN member state. Prime Minister Benjamin Netanyahu may summon Israel’s UN envoy for consultations in Jerusalem in protest, as he did in reaction to the UNESCO decision over the Temple Mount, which denied Jewish ties to the Temple Mount and Western Wall. But this “punishment” is highly unlikely to stop the snowball of international sanctions against Israel by all agencies of the UN and capitals of the world.

Camille Mansour, a former Sorbonne professor and adviser to the negotiating team of the PLO, told Al-Monitor last November , “Now that he is freed from elections-related political shackles, he can allow for Palestine to join the UN as a state under occupation.”

According to Mansour, Obama could accomplish a number of goals with such a decision. He said that it could be Obama’s gift to Middle East peace before leaving office Jan. 20. “He has the ability to instruct single-handedly his UN representative to support or abstain from a resolution that will become irrevocable once the UN Security Council passes it,” Mansour said. Even Obama’s successor, Donald Trump, will not be able to reverse it.

Mansour said. Recognition of a state, once it is approved by the United Nations is very difficult to reverse , as the state would have received international legitimacy.