UN vote: Will Obama muster the courage to push for the establishment of a Palestinian state? 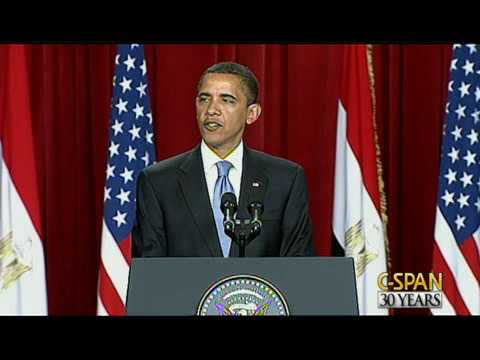 According to ME observers President Barack Obama must today muster the courage to fulfill his 2009 Cairo speech pledge (pictured) to push for the establishment of a Palestinian state.
Share:
President-elect Donald Trump warned the Obama administration Thursday against a possible abstention in a key U.N. Security Council vote that would declare illegal all Israeli settlements on Palestinian territory in the West Bank and the mostly Arab East Jerusalem.

The resolution, initially scheduled for a 3 p.m. vote, urges Israelis and Palestinians to commit to negotiations toward a two-state solution — a possible centerpiece for now-stalled peace efforts.

Word of the resolution — and the possibility of an abstention that would upend decades of U.S. policy — brought a flurry of activity in Israel and beyond. In a Twitter post, Prime Minister Benjamin Netanyahu said that “the U.S. should veto the anti-Israel resolution.”

That was followed by a near-identical, pre-dawn tweet from Trump and a statement by his transition office. “The resolution being considered at the United Nations Security Council regarding Israel should be vetoed,” he said.

“As the United States has long maintained, peace between the Israelis and the Palestinians will only come through direct negotiations between the parties, and not through the imposition of terms by the United Nations.”

“This puts Israel in a very poor negotiating position and is extremely unfair to all Israelis,” Trump said.

Within hours of the swelling criticism, the government of Egypt, which drafted the resolution and placed it on the Security Council agenda, asked for the vote to be postponed, at least until Friday, according to a spokesman for the Spanish U.N. mission, which currently holds the Security Council chair.

Trump has been highly critical of the Obama administration’s reproach of the government of President Abdel Fatah al-Sissi’s crackdowns on Egyptian civil society and said his administration would view Egypt as a close security ally.

The resolution, promoted by liberal Jewish groups in the United States, has been the subject of intense debate in recent days within the Obama administration. Secretary of State John F. Kerry has pushed for a clear statement of position before the administration leaves office.

A Kerry speech outlining the U.S. stance that was tentatively scheduled for Thursday morning appeared to have been canceled within two hours of its planned delivery, according to U.S. officials, who said the matter remained unsettled within the administration.

Kerry noted that the United States has repeatedly described settlements as an obstacle to peace but that the Israelis “haven’t listened.” At the same time, successive U.S. administrations have blocked U.N. resolutions declaring the settlements illegal and calling for international action against them.

As settlement activity has spread at a rapid pace over the past six months — and right-wing members of the Israeli government have spoken out against a two-state solution — U.S. dismay has grown. That has led to the current discussion of whether the administration should take advantage of its final month in office to make the kind of strong statement outlined in the resolution.

“If it’s biased and unfair and a resolution calculated to delegitimize Israel, we’ll oppose it. Obviously, we will,” Kerry said at the forum. “We always have. But it’s getting more complicated now because there is a building sense of what I’ve been saying to you today, which some people can shake their heads, say, well, it’s unfair.”

“We have been adamant to the Palestinians about their need to deal with their education system and to change the things kids are taught and to try to lead by example with respect to the nonviolence and so forth,” he said. “But I do believe that Israel, because of decisions that are being made on a daily basis quietly and without a lot of people seeing them or fully processing the consequences, is heading to a place of danger.”

Trump met with Netanyahu in September and spoke with him the day after the Republican’s election last month, inviting the Israeli leader to visit again at his earliest opportunity. At the time, Trump stated his intention to move the U.S. Embassy in Israel from Tel Aviv to Jerusalem, a highly symbolic act that successive U.S. presidents have refused to make. Both Israel and the Palestinians claim Jerusalem as their capital.
Last week, Trump named his New York bankruptcy attorney, Daniel Friedman, as his nominee to be U.S. ambassador to Israel. Friedman, a strong supporter and financial backer of West Bank settlements, has said that they are legal and that Israel should annex Palestinian territory.

Israeli cabinet ministers held an emergency meeting Thursday to discuss strategy if Washington decided not to use its veto powers in the Security Council.

“We expect our greatest ally not to allow this one-sided and anti-Israel resolution to be adopted by the Council,” tweeted Danny Danon, Israel’s ambassador to the United Nations.

Other Israeli minister and political leaders also released statements calling on the United States to stand by its longtime ally.

Education Minister Naftali Bennett from the hard-line Jewish Home party released a video clip calling the Security Council hypocritical for condemning Israel, while a “genocide is happening in Aleppo, Syria.”

“Jerusalem has been the Jewish capital for 3,000 years but later today the U.N. Security Council will gather to condemn and hurt Israel for living here in our capital. This is a Guinness world record in hypocrisy,” he said. “Hundreds of men, women and children are being killed in Aleppo and this is the number one issue from the Security Council’s perspective.”

France’s ambassador to Israel, Hélène Le Gal, told an Israeli radio station that she believed her country would vote in favor of the resolution.

She said it would make it clear to all the sides, particularly Israel, that the Security Council was worried about the situation.

The draft resolution condemns “all measures aimed at altering the demographic composition, character and status of the Palestinian Territory occupied since 1967, including East Jerusalem, including . . . the construction and expansion of settlements, transfer of Israeli settlers, confiscation of land, demolition of homes and displacement of Palestinian civilians, in violation of international humanitarian law and relevant resolutions.”
The settlements, it says, have “no legal validity” and are “a major obstacle to the achievement of the two-state solution and a just, lasting and comprehensive peace.”

It further demands that Israel “immediately cease all settlement activities” and calls on all states “to distinguish, in their relevant dealings, between the territory of the State of Israel and the territories occupied since 1967.”

The resolution calls for the U.N. secretary general to report on implementation of the resolution within three months. Assuming the resolution passes with a U.S. abstention, that would allow the Trump administration to veto any subsequent action to impose its terms.

The central question concerning the situation in Israel and the occupied territories these days is what will happen in the transition period ? Will President Barack Obama veto the UN Security Council resolution recognizing a Palestinian state, or will he make do with yet another speech rebuking Israel? Or perhaps he will prefer a UN vote condemning the Jewish settlements? Either way, any decision Obama makes will have far-reaching implications for millions of people in the Middle East.

If Obama opts to withhold his veto power and the Security Council turns Palestine into a new UN member of equal standing, Israel will automatically and officially become an occupier by force of another UN member state.

On the other hand, if Obama chooses only to issue a lame-duck reprimand to Israel over settlement construction, his final days in the Oval Office could also be the final days of Palestinian President Mahmoud Abbas and his Fatah movement at their headquarters in the Palestinian West Bank city of Ramallah. Defense Minister Avigdor Liberman seems to have already dismissed Abbas, promising to only do business with his successor.

According to Middle East observers President Barack Obama must now muster the courage to fulfill his 2009 Cairo speech pledge to push for the establishment of a Palestinian state.