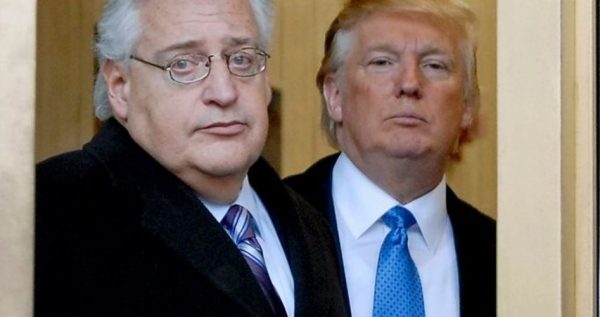 President-elect Donald Trump has chosen attorney David Friedman to serve as his U.S. ambassador to Israel.

Friedman advised Trump on U.S.-Israel affairs during the presidential campaign. Trump says in a statement released by his transition team that Friedman’s “strong relationships in Israel will form the foundation of his diplomatic mission.”

Friedman says in the statement that he looks forward to working “from the U.S. Embassy in Israel’s eternal capital, Jerusalem.”

Trump has pledged to move the U.S. embassy in Israel from its current location in Tel Aviv to Jerusalem, as Republicans have proposed for decades. The United Nations does not recognize Jerusalem as Israel’s capital.

Friedman promises to “work tirelessly to strengthen the unbreakable bond between our two countries and advance the cause of peace within the region.”

Friedman, who had also been a longtime Arutz Sheva contributor, spoke out in favor of Israel numerous times during the campaign and highlighted Trump’s pro-Israel stance.

In May, Friedman told Arutz Sheva in an exclusive interview that Trump believes “that Israel should continue to build settlements. This is land that Israel has held for almost 50 years. The population of Judea and Samaria is 400,000 people. You add in East Jerusalem you have almost a million people. These people aren’t going anywhere and Israel’s not going to make the same mistake that it made in connection with the evacuation of Gaza.”

In another interview with Haaretz, Friedman said that as president, Trump could support Israel annexing parts of Judea and Samaria ( the West Bank) .

He also told Channel 10 News in an interview during the campaign that, as president, Trump would not force a peace agreement with the Palestinian Authority on Israel, due to the fact that he “has great confidence in the Israeli government and the Israeli people.”

Life “miserable” for the White House

BUT Palestine’s UN envoy promised to make life “miserable” for the White House if it transfers the US Embassy to Jerusalem.
Riyad Mansour, the Palestinian ambassador to the United Nations, said in Washington last Friday that the move would represent a blatant defiance of Palestine’s rights over occupied Jerusalem. Palestinians would fire back, he said.

Mansour stressed the possible transfer of the US Embassy to Jerusalem would be regarded as a belligerent act towards Palestine. “If they do that, nobody should blame us for unleashing all of the weapons that we have in the UN to defend ourselves and we have a lot of weapons in the UN,” he said.

The Palestinian envoy asserted that he “can make their [the US] lives miserable every day with precipitating a veto on my admission as a member state,” however noting that appealing to the UN Security Council is an unlikely option due to Washington’s right to veto.