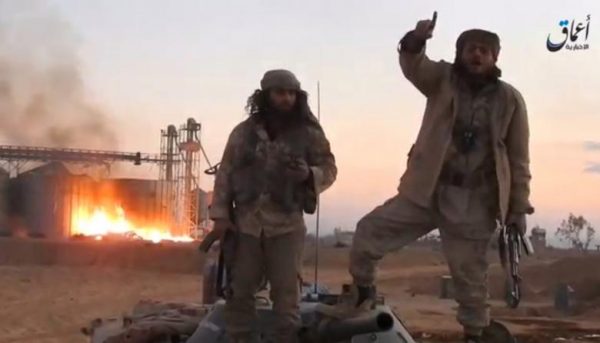 A still image taken from a video released by Islamic State-affiliated Amaq news agency, said to be in Palmyra, on December 11, 2016, purports to show Islamic State fighters in front of silos on fire and said to have been taken over by them. Handout via REUTERS TV
Share:
Militants from the Islamic State group got control of military equipment and weapons, possibly including air defense equipment, when they recaptured the Syrian town of Palmyra, the top U.S. general leading the fight against IS told reporters on Wednesday.

Lt. Gen. Stephen Townsend said Russian forces and the Syrian government took their eye off the ball and lost Palmyra and will likely try to take it back again. But if they don’t, he said, the U.S.-led coalition will take action, particularly if insurgents start moving weapons out of the city.

“Anything they seize poses a threat to the coalition, but we can manage those threats and we will,” Townsend said, adding that IS likely has some armored vehicles, various guns and other heavy weapons there.

Townsend said he anticipates that the coalition will have opportunities soon to strike the equipment and kill the militants operating it. “We will strike it if we see it moving away from Palmyra,” he said. “I think … as long as it stays in Palmyra, the Russians will have the lead and the regime will have the lead to deal with that.”

The coalition routinely communicates with Russia to reduce the risk of aircraft colliding in the skies above Syria. If the coalition decides to take action around Palmyra, Townsend said the Russians would be notified to avoid any potential mishaps in the air.

Islamic State militants retook Palmyra from Syrian troops on Sunday, scoring a major advance by taking advantage of the Syrian and Russian focus on Aleppo. Palmyra was taken over by IS last year and the militants spent 10 months in control, blowing up temples and other historic objects. Nine months ago Russian and Syrian forces regained the city amid much fanfare.

“I think they failed to consolidate their gains and they got distracted by the things they were doing, took their eye off the ball there. The enemy sensed weakness and struck and gained a victory that I think will probably be fleeting,” said Townsend. “I think this is probably an embarrassment to them (the Russians).”

Townsend said the complicating factor in any coalition attack on the city is that it’s difficult to tell Syrian government and Russian forces from Islamic State fighters there. He said the U.S. is staying out of it for now, giving Russia time to sort it out.

On plans to oust IS from Raqqa, its Syrian headquarters, Townsend said the coalition has trained more than 3,000 Syrian rebel forces, but he will probably need “double or triple” that number to launch the offensive.

He said the additional 203 U.S. troops recently authorized for the Syria fight will primarily be trainers and support teams to develop additional fighters for the Syrian Democratic Forces, including Arabs who would be expected to make up the force to hold Raqqa once it’s retaken. The U.S. previously had authorized 300 troops for the Syria operation, so this brings the total to about 500.

U.S. officials say there are roughly 250 U.S. forces in Syria now, and commanders have come close to the 300 limit a few times. None of the newly authorized troops have started moving into the country, said the officials, who were not authorized to discuss the numbers publicly so spoke on condition of anonymity.

Townsend said he expects that as Syrian forces get closer to surrounding and isolating Raqqa, there will be a pause in operations in order to develop plans for seizing and liberating the city.

In Iraq, Townsend said Iraqi forces have cleared about 25 percent of Mosul, or roughly half of the eastern side of the city. And as Iraqi forces move to take the one bridge remaining in IS control, Townsend said enemy fighters will be forced to decide whether to stay and fight or flee.

“If he wants to get out to try to go back home and stop fighting, he’s going to have to make that choice soon,” said Townsend. “I think you’ll see the eastern side will break at some point and go in a rush. And it’ll go from really hard like it is today to a whole lot easier, and we won’t have to clear every structure block by block all the way to the river because I think a lot of them will get the heck out.”

The west side of the city, he said, will likely be a harder fight because that’s where IS has built up the majority of its defenses.

More broadly, Townsend said he agrees with “ballpark” estimates that put the number of Islamic State fighters between 12,000 and 15,000.