Trump has been consulting with Obama on cabinet picks, report 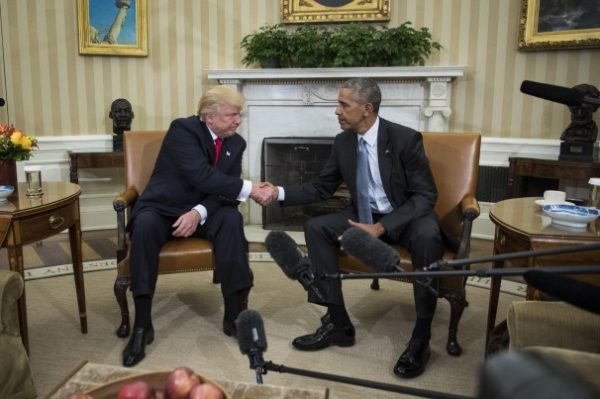 President-elect Donald Trump said Wednesday that he is taking advice on his political appointees from the man he spent months railing against on the campaign trail: President Barack Obama.

Trump said on NBC’s “Today” that he has sought the president’s advice on the candidates for various appointment-level positions and, in at least one case so far, has acted on that advice.

“I have asked him what he would think of this one and that one,” Trump said. “I would say that, yes, I take his recommendations very seriously, and there are some people that I will be appointing, and in one case have appointed, where he thought very highly of that person, yes.”

The president-elect declined to say which of his appointees thus far have been endorsed by Obama, telling anchor Matt Lauer that to disclose such information would be unfair to the president.

Trump spoke warmly of the president, with whom he has spoken multiple times since winning the White House a month ago. His complimentary tone toward Obama marks a dramatic shift from the president-elect’s campaign rhetoric, which relied heavily at times on attacking Obama and his signature policies.

Even before running for office, Trump’s first foray into the political world was as the most prominent supporter of the so-called birther movement, a baseless conspiracy that suggested Obama had been born in another country and was therefore ineligible to be president. It took Trump until mid-September to officially and publicly announce that be believed Obama had been born in the U.S., but he has never apologized for propagating the fictitious effort to delegitimize the president.

The two men met inside the White House on the Thursday after Election Day for roughly 90 minutes, the first time they had met in person. Since then, Trump has had little negative to say about the man who will be his predecessor.

“I will say this, I’ve now gotten to know President Obama. I really like him. We have — I think, I can say at least for myself, I can’t speak for him, but we have a really good chemistry together. We talk,” Trump said. “He loves the country. He wants to do right by the country and for the country. And I will tell you, we obviously very much disagree on certain policies and certain things, but, you know, I really like him as a person.”

“I’ve asked him what he thinks are the biggest problems of the country, what are some of the greatest assets going forward. And we have a very good dialogue,” he continued. “And I must tell you, I never met him before this and never spoke to him before this. I really, I do like him. I love getting his ideas. And I may differ in many cases. I differ very greatly in many cases.”