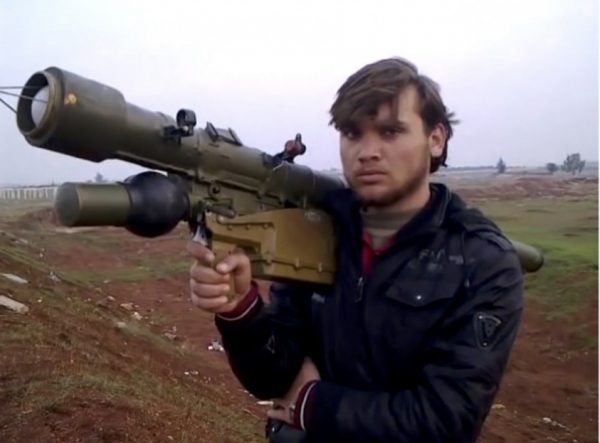 While the bill provides certain restrictions for transferring the controversial weapons, known as MANPADS or Man Portable Air Defense Systems, it represents a significant shift from prior iterations of the legislation. The missile-related language, first reported by Al-Monitor, also contradicts international guidelines championed by the United States that imply a de facto ban on transferring the shoulder-fired weapons to nonstate actors.

One long-standing concern is that the weapons, once injected into a conflict zone, can easily be transferred to people the government does not want wielding such firepower. Any distribution of the weapons would require near unanimous support from the military and intelligence agencies. As a result, the new defense bill provision could be largely symbolic.

Since 2012, the annual bill, known as the National Defense Authorization Act, has made no mention of the weapons, and the version the House passed in May contained language that explicitly prohibited allocating funds for sending MANPADS to “any entity” fighting in Syria. That language has since been removed and replaced with the current provision after the Senate and House committees met to work through discrepancies in their two bills. The version of the bill the Senate passed in June made no mention of MANPADS.

“The conferees continue to believe that putting MANPADS in Syria is a profoundly risky proposition,” said a House Armed Services Committee spokesman, who spoke on the condition of anonymity because of the legislation’s sensitivity. “However, the situation is so dynamic that they were hesitant to eliminate any option wholesale that a commander might want to consider.”

It is unclear who in the House or Senate pushed for the MANPADS provision in the bill. The chairman of the Senate Armed Services Committee, Sen. John McCain (R-Ariz.), has long called for delivery of the weapons to help the beleaguered rebels trying to stave off air attacks by both the Syrian government, and more recently, the Russian air force.

A spokesman for the Senate Armed Services Committee did not respond to a request for comment.

The $619 billion bill — which has been in the works for a better part of the year — will primarily fund the Pentagon through 2017 when signed into law. On Friday, the bill passed in the House 375 to 34 and could be voted in the Senate within the week.

Rep. John Conyers Jr. (D-Mich.), who voted against the bill, said in an emailed statement that he was “disappointed that the House of Representatives’ explicit prohibition on the transfer of these dangerous weapons into Syria was reversed — behind closed doors — by the conference committee.”

“The Obama Administration and most observers have long opposed their transfer into Syria due to the immense risk of proliferation and misuse by extremists,” Conyers said.

President elect-Donald Trump’s campaign focused heavily on a Syria policy that involved working with Russia. He has not yet signaled whether he will expand or reduce the current Pentagon and CIA-run programs that train and provide weapons to what is known as the “Vetted Syrian Opposition.” With Syrian rebels losing ground in their last major stronghold of Aleppo and U.S.-backed Kurdish and Arab fighters making steady progress against the Islamic State, the Trump administration will have decide if providing the country with surface-to-air missiles will do any good.

“This provision could be the first step toward a profound shift in U.S. policy. … It could be interpreted by the Trump administration as a de facto green light to export MANPADS to the rebels,” said Matt Schroeder, a senior researcher with the Geneva-based Small Arms Survey.

The suggestion that the United States could transfer MANPADS to Syrian opposition groups also runs contrary to a set of guidelines championed by President George W. Bush’s administration that were agreed upon at the 2004 Asia Pacific Economic Cooperation Summit in Chile. The guidelines adopted by the 21-member organization stated that MANPADS would be exported to “only to foreign economies or to agents specifically authorized to act on behalf of an economy.”

A State Department spokesman, speaking on the condition of anonymity to discuss pending legislation, said the State Department “would have deep concern about more of these types of weaponry getting into Syria.”

MANPADS allow individual fighters to hit low-flying aircraft with relative ease. The Russian Strela-2, one of the more prolific Soviet-era MANPADS in circulation, can engage targets flying at more than 7,000 feet. Although the weapons are somewhat bulky, their portability and accuracy have caused increasing concern about their use in possible terrorist attacks. In 2002, al-Qaeda fired two Strela-2 missiles that missed an Israeli charter plane taking off from an airport in Mombasa, Kenya. Since the Mombasa attack, the weapons have proliferated in conflict zones, namely in Syria and Libya, as government stockpiles of the weapons have fallen into rebel groups’ hands.

The last time MANPADS were covered in the defense bill was in 2011 when Congress proposed legislation to curb the weapons’ spread throughout the Middle East after rebels began looting them from Libyan stockpiles following the U.S.-led bombing campaign in Libya.

Used with greater frequency at the beginning of the conflict, MANPADS have appeared only in small numbers in the hands of Syrian opposition fighters since 2011.

The language in the defense bill stipulates that if MANPADS are to be sent to certain Syrian opposition groups, a detailed intelligence assessment of the unit receiving the weapons must be provided by the Pentagon and State department. Officials will also need to share how many MANPADS are to be sent and for how long, as well as how the group fits into “broader conflict in Syria.” The bill would not require congressional approval, only that the Pentagon and State Department submit their report “to the appropriate congressional committees” and wait 30 days.

Schroeder said the bill does not contain any language that ensures the weapons are stored properly or that they are monitored with GPS-type technology.