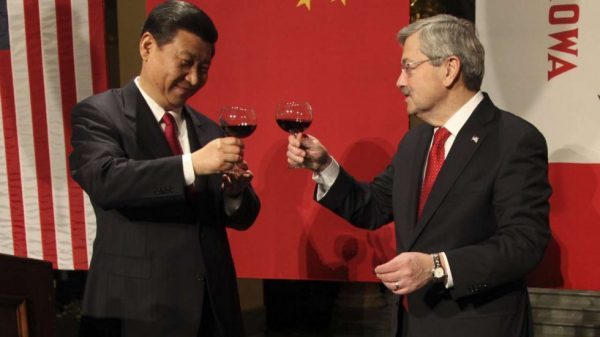 In 2012, Xi Jinping, left, then vice-president of China, is welcomed on stage by Iowa Governor Terry Branstad at the Iowa State Capitol in Des Moines.
Share:
President-elect Donald Trump has selected Terry Branstad, the long-serving Republican governor of Iowa, to serve as ambassador to China, a transition official confirmed Wednesday.

Branstad has extensive ties to China and a personal friendship with Chinese President Xi Jinping that dates back decades. If confirmed, the move could go some way to reassure China’s leadership that Trump understands the importance of healthy relations with Beijing.

The Chinese reacted with concern to Trump’s protocol-busting phone call last Friday with Tsai Ing-wen, the leader of Taiwan, an island that China considers a rogue province. Trump repeatedly attacked China on the campaign trail and in a pair of tweets last Sunday over its trade and currency policies, as well as the way it has staked its territorial claims in the South China Sea. He has threatened to slap tariffs of up to 45 percent on Chinese goods if Beijing didn’t “behave.”

The selection of Branstad was first reported by Bloomberg News and confirmed Wednesday by a transition official, who requested anonymity because the nomination had not yet been formally announced.

China’s foreign ministry did not confirm the report, but reacted warmly.

“First of all, I would like to say that Mr. Branstad is an old friend of the Chinese people and we welcome him to play a greater role in promoting Sino-U. S. relations,” spokesman Lu Kang told a regular news conference.

“The U.S. ambassador to China is an important bridge between the U.S. government and the Chinese government. No matter who is in this position, we are willing to work with him to push forward the sound, steady and steady development of Sino-U. S. relations.”

Branstad met with Trump in New York on Tuesday and issued a written statement saying he had enjoyed a “very cordial conversation” with the president-elect and that they had spoken about the transition and the next administration.

Branstad was among the most active Republican establishment figures on behalf of Trump, campaigning regularly with him in the state. The governor’s son, Eric, managed Trump’s general election campaign in Iowa, which was one of the contested battleground states. Although Trump finished only second in state’s Republican caucuses, he carried the state in the general election 51 percent to Hillary Clinton’s 42 percent.

At a rally in Sioux City, Iowa, Nov. 6, Republican presidential candidate Donald Trump thanked Iowa leaders, including Gov. Terry Branstad, who Trump said would be “a prime candidate to take care of China.” (The Washington Post)
Branstad’s move to Beijing, should he be confirmed, would elevate Lt. Gov. Kim Reynolds (R) to the governorship. Reynolds, who has long been considered Branstad’s favored successor, would become Iowa’s first female governor.

Under the Obama administration, experts say the post of ambassador had declined somewhat in importance: China policy was largely run out of the White House with the president tending to immerse himself in many of the details.

Under Trump, the role could be more significant — and not only because the next president is likely to leave many of the policy details to his advisers. By taking a phone call from Taiwan’s democratically elected leader Tsai, and continuing to tweet critical comments about China after his election win, the president-elect has shown he will not be bound by diplomatic convention and wants to show he is standing up to China.

Kerry Brown, professor of Chinese studies at King’s College, London, said it would be important having someone in the job who has the president’s ear and can call him up directly.

“There’s definitely going to be problems in the first few months — so you need someone who’s going to get direct access to the president, and get the president’s attention,” he said. “I get the feeling he’s not going to want piles and piles of briefings, he’s not going to wade through that. In a sense that makes the personal system, where you can have people speak to him directly, very important.”

Indeed Branstad, if he is nominated by Trump and confirmed by the Senate, could have his work cut out smoothing over some of the ripples in the relationship — reassuring the Chinese that the United States does not want confrontation and conflict, but still sees areas for cooperation.

Jie Dalei, an assistant professor at the School of International Studies of Peking University, reacted cautiously, saying the appointment could help communication, “but is unlikely have too much impact at the decision-making level.”

“At this point, his tweets and remarks certainly have attracted the most attention,” he said. “Compared to that, the appointment of an ambassador to China, though very thoughtful, is unlike to fix the damage caused by the uncertainty of his tweets and Taiwan call.”

He has described Xi as an “old friend,” and, during a 2015 interview with state news agency Xinhua, proudly displayed photographs of two meetings with the Chinese leader.

The first dated back to 1985, when Xi made his first trip to the United States as a young agriculture officer from Hebei. The other was from 2012, when Branstad hosted an elaborate dinner at the Iowa Capital for the then vice president of China.

Branstad also met Xi on a visit to China in 2011, saying the pair had spoken for 45 minutes as Xi reminisced about the hospitality he had received when he was in Iowa.

The six-term governor, the longest-serving in American history, and his state voted for Trump by the largest margin for a Republican since Ronald Reagan in 1980.

It also a state with strong economic ties to China, as the largest producer of corn and among the largest soybean producers in the United States.

China has been a fast-growing market for Iowa’s agriculture and processed food, with exports from the state up by a factor of 13 between 2000 and 2010 to $6.3 billion, according to Chinese state media.

That fact alone may reassure some people that Trump would not needlessly start a trade war with China, since retaliation from Beijing in the shape of reduced soybean and corn imports would not only hurt Iowa but also other Republican-controlled agricultural states.

Branstad, 70, served as governor of Iowa from 1983 to 1999, and again from 2011. Trump will visit the state Thursday on his post-election victory tour.

Two days before the Nov. 8 presidential election, during a rally in Sioux City, Trump called the governor to the stage, calling him “our prime candidate to take care of China.”