OPEC has invited 14 other crude producers, who together pump about a fifth of the world’s oil, to talks this week in Vienna aimed at securing wider cooperation with production cuts.

Russia already committed to reduce its output by 300,000 barrels a day following the Organization of Petroleum Exporting Countries’ agreement last week to a production cut of 1.2 million, Secretary-General Mohammad Barkindo said on Monday at the PetroTech conference in New Delhi. Major producers including Mexico and Kazakhstan, along with relative minnows like Bolivia and Uzbekistan, have been asked to attend talks with OPEC ministers in the Austrian capital on Dec. 10, he said.

Oil prices have risen 18 percent since OPEC’s surprise agreement last week to make its first supply cuts in eight year, which was also the first accord since the late 1990s involving non-members. The new 32.5 million barrel-a-day production target is only slightly below the group’s estimate for demand for its crude next year, meaning wider cooperation is needed to make a significant dent in the record stockpile surplus that has built up during three years of oversupply. 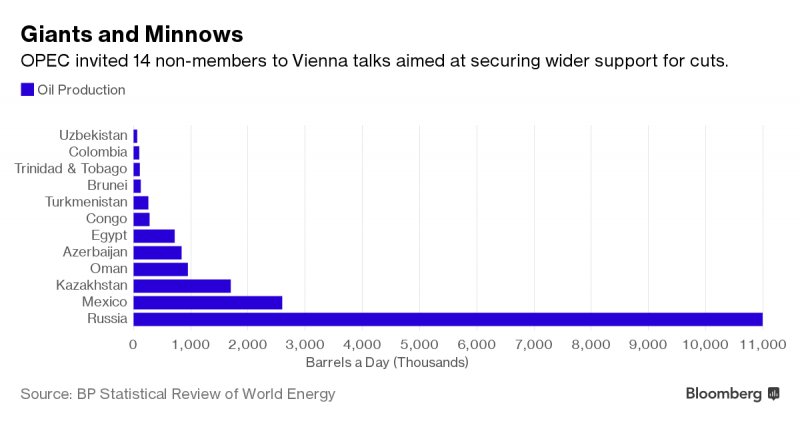 “It remains unclear to us which other non-OPEC producers might be willing to commit to or even claim production cuts,” JBC Energy GmbH said in a note. “Although OPEC officials spoke of a 300,000 barrel-a-day contribution from Russia towards an overall 600,000 barrel-a-day non-OPEC cut, we remain quite skeptical that this will actually happen.”

After Russia, Mexico is the largest producer invited to Vienna. While the nation’s output is expected to fall by about 150,000 barrels a day next year to 1.94 million due to the natural decline in production at aging fields, the country doesn’t plan any further cuts, a Pemex official said last week.

Kazakhstan, the next-largest producer with daily output of about 1.7 million barrels, will decide on whether to cut output after talks with OPEC, the Astana-based Energy Ministry press service said in a statement Dec. 2. The country is not ready to freeze or cut production while the $50 billion Kashagan project is still starting up, Deputy Energy Minister Magzum Mirzagaliyev said after talks with OPEC in Vienna on Oct. 29.
Oman, which pumps about 1 million barrels a day, has committed to matching any oil-output cut agreed by OPEC up to a maximum of 10 percent, three people familiar with the matter said Nov. 30.

The other invitees are Bahrain, Colombia, Congo, Egypt, Trinidad and Tobago, Turkmenistan, Azerbaijan and Brunei. Altogether, the 14 nations pumped about 18.8 million barrels a day of oil last year, equivalent to 20 percent of global supply, according to data from BP Plc.
BLOOMBERG