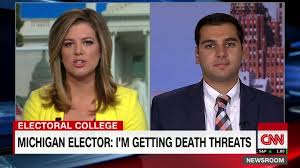 A college student from Michigan said Wednesday that he has received death threats after being chosen to cast an Electoral College vote for his state in December.

Although the presidential election was won by Donald Trump on November 8, it’s not official until December 19, when all 538 members of the Electoral College will come together to cast their votes.
Michael Banerian, the youth vice-chairman of the Michigan Republican Party, will be one of his state’s 16 electors. The honor of being selected, a role typically bestowed to recognize a person’s service and dedication to their political party, has come at a price, Banerian told CNN’s Brianna Keilar .
“Obviously, this election cycle was pretty divisive. Unfortunately it’s bled over into the weeks following the election and I have been inundated with death threats, death wishes, generally angry messages trying to get me to change my vote to Hillary Clinton or another person, and unfortunately, it’s gotten a little out of control.” Banerian said.
Banerian said he has been threatened with violence.
“I’ve had people talk about putting a bullet in the back of my mouth. I’ve had death wishes or people just saying ‘I hope you die.’ Or, ‘do society a favor, throw yourself in front of a bus,'” he said.
In every other presidential election in history, Electoral College members have voted in accordance with their state’s voters, meaning that, in Michigan, Banerian and his fellow electors will cast their votes for Donald Trump. But even if he could change his vote, it would still be against the law to do so in his state, Banerian said.
He suggested people look up how the process works.
“In the state of Michigan we have laws that prevent faithless electors. So, essentially what happens, if I tried to vote for somebody else, which, let me be clear, I don’t want to, but if I tried to, I would be removed and replaced by another elector. It’s a pointless endeavor,” he said.
Banerian told Keilar he had filed a police report.
“I just had a very nice meeting with my local police department,” he said.
CNN has not spoken with the police department or verified any threats against Banerian.
CNN
Share:
Share Tweet Pin It +1
This error message is only visible to WordPress admins