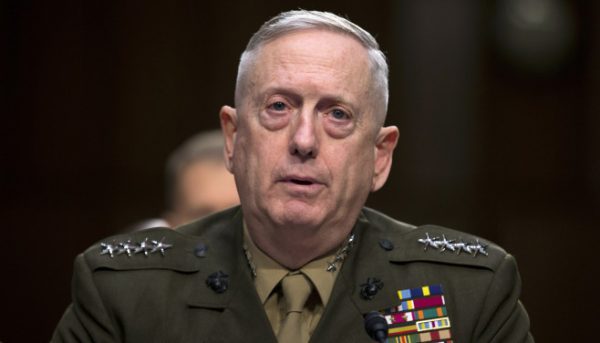 President-elect Donald Trump has picked retired Marine Gen. James Mattis to be his secretary of defense, tapping yet another outspoken ex-military leader who butted heads with the Obama administration to shape and carry out his national security strategy.

If confirmed, the highly decorated battlefield commander would be only the second retired general to become defense secretary — and would require a special waiver from Congress in the form of separate legislation.

“I will not tell you that one of our great, great generals — don’t let it outside of this room,” Trump teased a rally in Cincinnati Thursday night, playing up the drama. “We are going to appoint ‘Mad Dog’ Mattis as our secretary of defense … but we are not announcing it until Monday, so don’t tell anyone. He’s great.”

“They say he’s the closest thing to Gen. George Patton that we have and it’s about time,” he added, referring to the impolitic and aggressive battlefield commander in World War II. “It’s about time.”

Hours earlier, Trump’s transition team had denied that he had settled on a defense secretary despite a report in The Washington Post that Mattis was the choice. “No decision has been made yet with regard to Secretary of Defense,” spokesman Jason Miller tweeted at 4:40 p.m.

Mattis, 66, so nicknamed for his salty language and obsessive dedication to the military, was the top U.S. commander in Iraq and Afghanistan from 2010 to 2013. He had earlier co-authored a counterinsurgency strategy manual credited with helping to halt some of the worst sectarian violence in Iraq before the U.S. military withdrawal in December 2011.

But as head of the U.S. Central Command he also clashed with President Barack Obama’s National Security Council, particularly over Iran, which Mattis has called “the single most enduring threat to stability and peace in the Middle East.”

It’s a view that aligns more closely with Trump and his pick for White House national security adviser, retired Lt. Gen. Michael Flynn, whom the Obama administration had removed as head of the Defense Intelligence Agency in 2014. Both Trump and Flynn have advocated pulling out of an agreement reached with Iran last year to curtail its nuclear weapons program in exchange for a lifting of economic sanctions and eventually removing the arms embargo.

Yet not all of Mattis’ views are so in sync with Trump and Flynn, who have made friendly gestures to Russian President Vladimir Putin. Mattis has expressed deep wariness of Russia’s intentions, saying it wants “to break NATO apart.”

During the campaign Mattis did not hold back in criticizing Trump and some of his rhetoric, including the president-elect’s comments that NATO was obsolete and that its members don’t pay their fair share.

“Some of those allies have lost more troops per capita in Afghanistan than we have,’’ Mattis, who also served as NATO’s supreme allied commander for transformation, told POLITICO in July. “Some of them are spending 20 percent of their national budget on defense.”

On Trump’s call for a ban on Muslim immigrants, Mattis said that such talk prompts U.S. allies to think “we have lost faith in reason.”

“They think we’ve completely lost it,” he said. “This kind of thing is causing us great damage right now, and it’s sending shock waves through this international system.

The general has also espoused some views that break with the majority of his fellow military leaders. He has expressed reservations about allowing women to serve in combat, telling the Marines’ Memorial Club in San Francisco that “the idea of putting women in there is not setting them up for success.” He has also questioned whether the U.S. nuclear arsenal needs to consist of submarines, bombers and land-based missiles. “Is it time to reduce the Triad to a Diad, removing the land‐based missiles?” he asked the Senate Armed Services Committee last year.

The pick was swiftly lauded by the GOP national security establishment.

“He brings a clear-eyed view to the potential adversaries our nation faces, including Russia,” Tom Spoehr, director of the Center for National Defense at the conservative Heritage Foundation, said in a statement, calling the general “an outstanding selection for this critically important position.”

Mattis has key backers on Capitol Hill, including Sen. John McCain, the Arizona Republican who chairs the Armed Services Committee, which would lead the confirmation process.

“General Mattis is one of the finest military officers of his generation and an extraordinary leader who inspires a rare and special admiration of his troops,” McCain said in a recent statement. “He is a forthright strategic thinker. His integrity is unshakable and unquestionable. And he has earned his knowledge and experience the old-fashioned way: in the crucible of our nation’s defense and the service of heroes.

“General Mattis has a clear understanding of the many challenges facing the Department of Defense, the U.S. military and our national security,” McCain added.

Since retiring from the Marine Corps, Mattis has served on the board of defense giant General Dynamics, as well as Theranos, a Silicon Valley biotech company that came under scrutiny for its business practices — and which Mattis reportedly advocated on behalf of before the military despite agreeing not to.

He’s also a fellow at the Hoover Institution, a conservative think tank at Stanford University in Palo Alto, Calif., and has done some private consulting.

Mattis’ elevation to Trump’s Cabinet would make him a first among equals.

Apart from the president, only the defense secretary has the legal authority to order the military into action. And while the decision to launch a nuclear attack rests solely with the commander-in-chief, the procedures require secondary confirmation from the defense secretary, though he does not get a veto.

But to get the job Mattis will need something highly unusual: a waiver. As a result, his selection is viewed by some as a major departure from tradition.

Mattis is technically ineligible to be Defense secretary because the law requires retired military officers to be out of uniform for seven years before they can become the military’s civilian leader. That’s in an effort to ensure that civilian control of the armed forces, a bedrock of the American democratic tradition, remains inviolate.

Unless Congress votes and the president signs an exception, “a person may not be appointed as secretary of defense within seven years after relief from active duty as a commissioned officer of a regular component of an armed force,” the law says.

“It happened once,” Harold Brown, who was defense secretary under President Jimmy Carter from 1977 to 1981, told POLITICO. “And that was George Marshall,” the Army’s legendary chief of staff in World War II, who went to become both secretary of State and secretary of defense under President Harry Truman. “Congress had to pass a separate law exempting him.”

In 1994, President Bill Clinton picked retired Adm. Bobby Inman to be Defense secretary, but he had been off of active duty for the required period and his nomination was ultimately withdrawn anyway.

When Congress passed a waiver for Marshall in 1950, it made clear it did not want to set a precedent.

“The Congress’ report at the time said it is very unusual,” Brown said, “and should probably never happen again. This is a significant barrier, though it is not in insuperable one. The Trump administration would have to make a very compelling case. Mattis doesn’t have the standing of George Marshall. They’d have to make the case he is another George Marshall.”

Some Republicans think he may be.

Earlier this year, a bloc of GOP hawks who opposed Trump’s candidacy tried to persuade Mattis to run for president as a third-party candidate, though he expressed no interest.

Arnold Punaro, a former staff member of the Senate Armed Services Committee who helped craft the current statute, said that while Mattis’ waiver would need to be approved by both houses of Congress and signed by the president, he does not see it as a major problem.

“He would not in any way undermine or erode civilian control of the military, and it would be hard to find someone who would be less likely to be pushed around by the military and he is now a civilian and would be firmly in charge,” said Punaro, calling Mattis a “stellar choice.”

One of Mattis’ fellow retired generals also doesn’t anticipate it will pose much of a roadblock.

“Waivers are waivers,” said retired Army Lt. Gen. Mick Bednarek, who until last year was the top U.S. military adviser in Iraq. “In the case of Jim Mattis, that would not be too contentious. The real issue is his views and perspectives.”

Mattis is known as one of the most blunt battlefield commanders of his generation. He is mostly revered — but also reviled by some — for his rough edges and controversial comments, traits that have gotten him into hot water.

“You go into Afghanistan, you got guys who slap around women for five years because they didn’t wear a veil,” he said in in 2005. “You know guys like that ain’t got no manhood left anyway, so it’s a hell of a lot of fun to shoot them.”

Also in his rhetorical repertoire: “The first time you blow someone away is not an insignificant event. That said, there are some a——- in the world that just need to be shot.”

But despite his candor, Mattis is also considered a “warrior monk” for the library of books he carried from post to post, ranging from Roman philosophy to Sun Tzu’s “The Art of War.”

“You are part of the world’s most feared and trusted force,” he once told forces under his command. “Engage your brain before you engage your weapon.”

Mattis, who is unmarried, was also known as the rare commander who could be found visiting his troops in their fighting positions, or volunteering to be the watch officer on Christmas so one of his underlings could be with his family.

“His dedication is unparalleled. He is married to the the nation,” Bednarek told POLITICO. “He has a 100 percent focus on mission accomplishment. His forte is his leadership and his thoughtfulness.”

Retired Adm. William Fallon, who was Mattis’ boss early in the Iraq War, said he believes Mattis may be just the right person to run the Pentagon.

While he has vast experience in war, he has also been outspoken in recent years about the need for clearer goals and policies to guide it.

“The most important thing is that Jim’s got a really good understanding that you need to have a good policy framework before digging foxholes,” Fallon told POLITICO. “He has been urging leadership to focus on coming up with policies before sending troops into action.”

“That is what is really needed right now,” Fallon added.