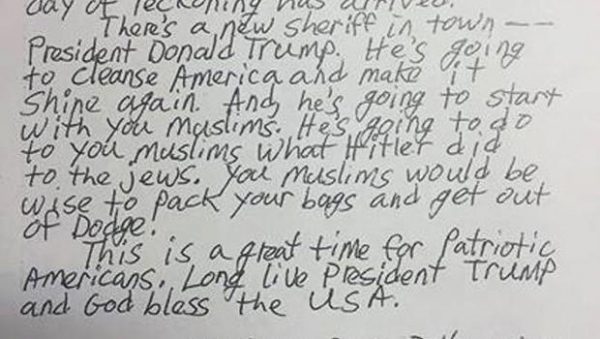 A hate letter delivered to the Evergreen Islamic Center in San Jose, Calif., threatened that President Donald Trump will “do to you Muslims what Hitler did to the Jews.”
Share:

Four mosques — three in California and one in Georgia — have received letters threatening that President-elect Donald Trump will do to Muslims what Adolf Hitler “did to the Jews,” according to the Council on American-Islamic Relations, or CAIR.

The handwritten letters, which referred to Muslims as “children of Satan,” were mailed to Islamic centers in San Jose, Long Beach and Pomona in California and, most recently, in Savannah, Ga. The letters called Trump the “new sheriff in town” who will “cleanse America and make it shine again” by eradicating the country’s Muslim population.

“You Muslims are a vile and filthy people. Your mothers are whores and your fathers are dogs,” the letters state. “You are evil. You worship the devil. But, your day of reckoning has arrived.”

The letters went on to say that Muslims “would be wise to pack your bags and get out of Dodge.”

The Evergreen Islamic Center in San Jose was the first to receive the letter, according to CAIR, a civil liberties and advocacy organization for Muslims in the United States. Authorities were alerted Thursday night after the center’s imam found it in the mail, the San Francisco Chronicle reported.

Sgt. Enrique Garcia, a spokesman for the San Jose Police Department, told the Chronicle that investigators are treating it as a “hate-motivated incident.”

On Saturday, CAIR said the Islamic centers in Long Beach and Pomona received a similar letter. The same letter was later sent to a mosque in Savannah, CAIR said late Sunday.

“The hate campaign targeting California houses of worship must be investigated as an act of religious intimidation, and our state’s leaders should speak out against the growing anti-Muslim bigotry that leads to such incidents,” Hussam Ayloush, executive director for CAIR’s office in Los Angeles, said in a statement.

The letter, which was signed “Americans for a Better Way,” ended with “long live President Trump and God bless the USA.”

Faisal Yazadi, chairman of the board of the Islamic center in San Jose, said he hopes the sender would try to engage in a conversation with the Muslim community.

“Our doors are never locked,” Yazadi told the Chronicle. “I hope that person knows that we’re more than happy to have a dialogue. Hopefully, we learn a thing or two from him or her, and he or she learns something from us.”

“Whoever sent these letters should know that they have only strengthened our resolve to keep practicing our faith, defending our rights and building bridges with our neighbors.”

The letter sent to the Islamic center in Georgia had a return address from “Reza Khan” in Savannah. But a public records search revealed that the address isn’t valid, and there’s no one by that name who lives in Savannah. The letter was postmarked Santa Clarita, Calif.

The FBI said this month that hate crimes against U.S. Muslims spiked last year to its highest level since the attacks on Sept. 11, 2001.

Law enforcement agencies across the country reported 257 anti-Muslim incidents last year, an increase of nearly 67 percent from 2014, according to recent FBI data.

Overall, hate crimes increased by 6.7 percent from 2014 to 2015. Anti-black and anti-Jewish incidents rose by about 7.6 and 9 percent, respectively, according to the FBI.

Ibrahim Hooper, a spokesman for CAIR, told The Washington Post’s Matt Zapotosky that the anti-Muslim rhetoric that came out of the presidential campaign was to blame.

On the campaign trail in December, Trump called for “a total and complete shutdown” of Muslims entering the United States. The ban is one of his most controversial and popular proposals, alongside building a wall on the U.S.-Mexico border and deporting people who are in the United State illegally. Trump’s campaign later repackaged the proposal, saying immigration should be suspended from countries “compromised by terrorism.”

More than 100 anti-Muslim incidents have occurred since the presidential election, according to CAIR’s national office. The Southern Poverty Law Center, a hate-watch group, has tallied more than 700 incidents of harassment from Nov. 9 to Nov. 16. Many appear to have been made in Trump’s name and were directed at immigrants, African Americans and Muslims. The center cautions that not all incidents have direct references to the president-elect and that not every report could be immediately verified.

CAIR also said this month that the FBI questioned Muslims in at least eight states to seek information about a possible threat from al-Qaeda to carry out pre-election attacks.

Hassan Shibly, a lawyer and executive director of the CAIR office in Florida, told The Post’s Katie Mettler that his clients were asked whether they knew the al-Qaeda leaders killed in U.S. military strikes last month and whether they knew of anyone who wished to harm Americans at home or abroad. Among those questioned, Shibly said, were a youth group leader and wealthy doctors.

“The FBI actions . . . to conduct a sweep of American Muslim leaders the weekend before the election is completely outrageous and . . . borderline unconstitutional,” Shibly told The Post. “That’s the equivalent of the FBI visiting churchgoing Christians because someone overseas was threatening to blow up an abortion clinic. It’s that preposterous and outrageous.”