For Assad, winning the Syrian war may lead to new troubles 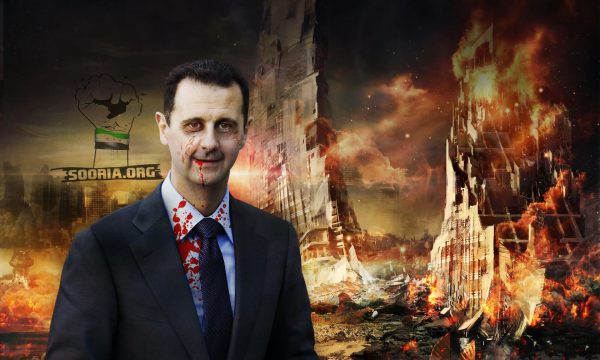 BEIRUT, Lebanon — With the Syrian government making large territorial gains in Aleppo on Monday, routing rebel fighters and sending thousands of people fleeing for their lives, President Bashar al-Assad is starting to look as if he may survive the uprising, even in the estimation of some of his staunchest opponents.

Yet, Mr. Assad’s victory, if he should achieve it, may well be Pyrrhic: He would rule over an economic wasteland hampered by a low-level insurgency with no end in sight, diplomats and experts in the Middle East and elsewhere say.

As rebel forces in Aleppo absorbed the harshest blow since they seized more than half the city four years ago, residents reported seeing people cut down in the streets as they searched frantically for shelter. The assault punctuated months of grinding battle that has destroyed entire neighborhoods of the city, once Syria’s largest and an industrial hub.

If Aleppo fell, the Syrian government would control the country’s five largest cities and most of its more populous west. That would leave the rebels fighting Mr. Assad with only the northern province of Idlib and a few isolated pockets of territory in Aleppo and Homs Provinces and around the capital, Damascus.

But analysts doubted that would put an end to five years of war that have driven five million Syrians into exile and killed at least a quarter of a million people.
Ryan C. Crocker, a veteran diplomat in the Middle East, including in Lebanon, Syria, Kuwait and Iraq, where he served as an American ambassador, said he believed that the fighting in Syria would go on for years because once the Assad government had taken the cities, the insurgents would hide in the countryside.

“The Lebanon civil war is a comparison worth looking at,” he said. “It was long, hot and mean, and it took 15 years to end and it only ended because the Syrians moved into Lebanon and stopped it.”

He added, “With Syria, we’re just five years into it, and there’s no Syria to come in and end it.”

A little over a year ago, such an outcome was virtually unthinkable. Even if Mr. Assad ultimately prevailed, the thinking went, he had crossed so many red lines that he would be too toxic to remain in power.

From using so-called barrel bombs to deploying chemical weapons in civilian areas to doing business with the Islamic State from time to time by buying its oil, Mr. Assad had breached so many international norms that it was expected he would be forced out under international pressure, making way for a new government that would have slightly less blood on its hands.

But buttressed by Russian air power, Iranian expertise and recruits that include Iran-trained Iraqi and Afghan militias and fighters from the Lebanese militant group Hezbollah, the Assad government has reversed the tide, steadily regaining ground it lost earlier in the war.

“The Russian and Iranian intervention has completely changed the dynamic for Assad,” said Robert S. Ford, a former American ambassador to Syria and now a senior fellow at the Middle East Institute.

“Look at the fighting in Aleppo,” he added. “There are at least as many Lebanese Hezbollah and Iraqi-Iranian militia fighters as there are soldiers born in Syria, so the war of attrition that was going against Assad is no longer doing that because of Iranian manpower.”

But the darker side is what kind of country would be left. “So Assad stays there and the Russians and Iranians prevail, but they govern over a half-dead corpse, and Syria is just this gaping wound that stretches as far as the eye can see,” Mr. Ford said.

Mr. Assad would also be beholden to his two sponsors, Russia and Iran, reviled by many of his own citizens in the Sunni-majority country and rejected by some of the main Sunni powers in the Middle East. That could mean he would face efforts from Iran to solidify its regional reach by expanding Shiite influence in Syria and demanding a role in conquered areas such as Aleppo, perhaps even assigning Iranian-backed Shiite militias there, some experts said.

Still, he is ascendant now, in a limited fashion. The rebels lack consistent military aid — particularly with the incoming administration of President-elect Donald J. Trump expressing doubts about the current level of American support for them — and they are divided among a bewildering array of groups, including Qaeda aspirants and Kurdish separatists. They have witnessed a decline not only in fighters but in community support, always a critical factor for guerrilla movements.

When Russia entered the Syria conflict last year, President Obama’s security team predicted that it would become trapped in a quagmire. Almost the opposite has happened: Russia now looks strong and, along with Iran, has given the Syrian government the resources it needed to make military headway.

At the same time, Washington is incurring a strategic cost for its decision not to engage, said Emile Hokayem, a senior fellow at the International Institute for Strategic Studies’s Middle East office in Bahrain.

“Putin looks tough and wily, while America looks incompetent and unable to sustain its commitment, and that’s a big win because you have a lot of countries in the region which are re-evaluating their relationships,” Mr. Hokayem said. “Now, Russia is a relatively weaker power to the U.S., but with Trump there’s no expectation that the U.S. will serve as a guarantor of regional security, so Russia is a very attractive partner.”

Gradually, Mr. Assad has worn down his most determined opponents.

The regional actors who oppose Mr. Assad — Turkey, Saudi Arabia and the Persian Gulf countries — have limits to their support of the rebels.

In particular, Turkey, which at one time turned a blind eye to the Islamic State’s transit of its borders, has recently embraced fighting the extremist group and made that, rather than fighting Mr. Assad, its top mission. In large part, its motivation for putting its troops into Syria has been to make sure the Kurds, its main enemy, do not gain control of more territory along the Turkish border.

The Europeans, at one time fierce adversaries of Mr. Assad, have been largely silent as he obliterates Aleppo. But this victory will also come at a cost, analysts say.

Mostly, Continental Europe just wants the war to stop in order to stanch the flow of refugees trying to cross its borders.

In Germany, economically the strongest country in the region and the one which has taken by far the most refugees, “Angela Merkel is just hanging on,” said Mr. Crocker, who was recently in Berlin, referring to the German chancellor.

Yet, Mr. Assad’s victory could confront Europe with a Hobson’s choice: Help pay for Syria’s reconstruction or face having the flow of refugees continue. Without economic help, there will be little to keep people in Syria, particularly if the insurgency continues, as analysts expect.

Other than Europe, it is hard to see where Mr. Assad could attract the funds he would need to rebuild his devastated country.

That could leave Syria in a long-term state of war and poverty. “Where’s the financing for rebuilding? I don’t think that Russia and Iran can afford it, and I don’t think China will do it,” Mr. Ford said. “They need hundreds of billions of dollars.”

The American Congress is unlikely to contribute, and neither are institutions like the World Bank and the International Monetary Fund, where opponents of Mr. Assad’s like the United States and Saudi Arabia have considerable influence.

It is also unlikely that the United States will make a renewed effort in Syria. Mr. Obama always resisted involvement in the civil war, focusing on defeating the Islamic State and giving limited training and support to the rebels opposing Mr. Assad. Mr. Trump is expected to continue to focus on the Islamic State, and he has expressed little interest in maintaining support for the rebels.

Meanwhile, the Assad government appears to be moving methodically to destroy the remaining rebel positions around Homs, Damascus and Aleppo.

The desperate words used by political activists, civilians and fighters interviewed on WhatsApp, a phone and messaging service, from inside places now being bombed repeatedly suggest the rebel resistance may be nearing its limit — especially in Aleppo.

An Aleppo rebel activist, Hisham, who refused to give his full name for fear of reprisal from the government, said over the weekend that the rebel groups were meeting continuously to discuss options, most involving deals with the Syrian government to try to get aid to civilians in eastern Aleppo, who are in desperate need of food, fuel and clean water.

The rebels have a dilemma: go on fighting and allow people to die of starvation or from bombings, or agree to lay down their weapons so the Syrian government, Iranian militias and the Russian military will allow aid convoys through. But if they do that, they will have ceded the ground to the Syrian government.

“It’s not easy to decide what to do: If we refuse, that means the decision is to execute 300,000 people, and if we agree to transform the revolution into aid and lifting the siege. … ” Hisham’s voice trailed off.

Sheer deprivation can make the intentions of even the most fervent activists begin to dissolve, which is the whole point of the Syrian government strategy of besieging rebel holdouts.

Bassem Ayoub, another activist in Aleppo, described the sense of barely hanging on late last week. “Many foodstuffs are missing in Aleppo: vegetables, fruit, coffee and baby milk,” he said, as well as tissues, diapers, gas and cookies.

“If you ask the children about their dreams, they will tell you, ‘We dream of bananas, apples, chicken.’ Those are their dreams.”