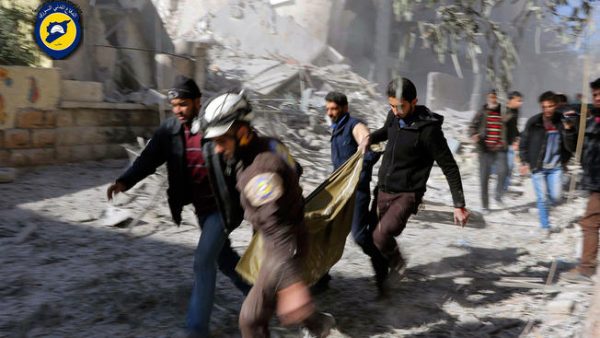 At least eight children were killed in Aleppo Sunday when rockets struck a school in the contested city
Share:

The Syrian government on Sunday refused a U.N. proposal to grant the rebel-held eastern districts of Aleppo autonomy in order to restore calm to the war-torn city.

Foreign Minister Walid al-Moallem said the state’s institutions “must be restored” across the city and the militants expelled.

At least 164 civilians have been killed since the government renewed its assault on the besieged enclave six days ago, according to the Britain-based Syrian Observatory for Human Rights.

The U.N. estimates 275,000 people are trapped inside. By Saturday, the government had damaged or destroyed every hospital in the east, according to the Syrian American Medical Society, which supports doctors and hospitals in Syria.

Rebels outside the city have meanwhile launched two unsuccessful offensives to break the government’s siege and shelled the government-held western districts.

U.N. envoy Staffan de Mistura had proposed that the Syrian government grant eastern Aleppo autonomy in exchange for peace, and called on the estimated 900 al-Qaida-linked militants in the east to depart to other rebel-held territory in Syria.

But al-Moallem refused the offer in a meeting with de Mistura in Damascus on Sunday. Addressing a press conference after the meeting, the foreign minister said restoring government rule was a matter of “national sovereignty.” He said Damascus would not allow the people of eastern Aleppo to be “hostages to 6,000 gunmen.”

“We agreed on the need that terrorists should get out of east Aleppo to end the suffering of the civilians in the city,” he said.

Syrian opposition forces meanwhile pressed on with their preparations to attack the Islamic State-held town of al-Bab, about 21 miles (35 kilometers) northeast of Aleppo. They are backed by Turkish ground forces operating inside Syria. Al-Moallem called the Turkish presence a “violation” of Syrian territory.

“We cannot accept to have one Turkish soldier to remain on Syria’s land,” he said.

De Mistura is expected to make remarks later in the day about the meeting with the foreign minister.

The envoy warned in an interview with the U.K. newspaper The Guardian earlier this week that the government was chasing a “pyrrhic victory” in Aleppo if it does not arrive at a political settlement with the opposition.

He warned the military’s approach would drive more moderate rebels into the ranks of the Islamic State group.

Earlier Sunday, at least eight children were killed when rockets struck a school in Aleppo’s government-run western quarters, the Observatory said. Syrian state media said a teacher was also killed in the attack.