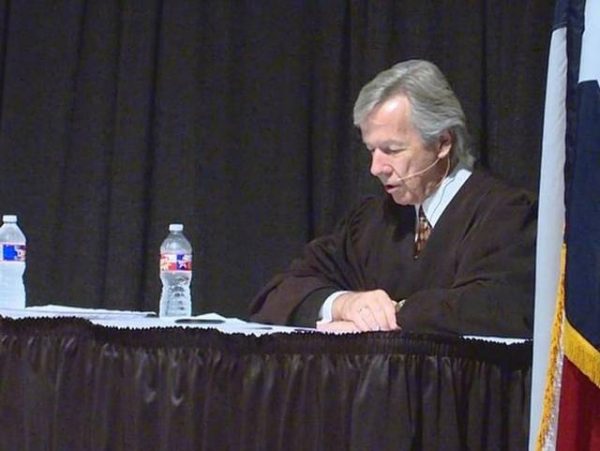 U.S. District Judge John Primomo
Share:
A federal judge presiding over a citizenship ceremony in San Antonio told the soon-to-be Americans that they needed to accept Donald Trump as their president, “and if you do not like that, you need to go to another country.”

The incident occurred Thursday afternoon at a naturalization ceremony at the Institute of Texan Cultures.

Asked later about his comments by KENS5 in San Antonio, U.S. District Judge John Primomo said he meant the words to be unifying and respectful of the office of president, not political. He added that he didn’t vote for the president-elect.
During the ceremony, Primomo told the incoming citizens: “I can assure you that whether you voted for him or you did not vote for him, if you are a citizen of the United States, he is your president. He will be your president and if you do not like that, you need to go to another country.”

Primomo went on to express his opinion about U.S. protesters carrying signs saying “He’s not my president,” as well as NFL players taking a knee during the national anthem.

“I detest that, because you can protest things that happen in this country; you have every right to,” he said, according to KENS5. “You don’t do that by offending national symbols like the national anthem and the flag of the United States.”

Those interviewed by KENS5 afterward seemed to be more focused on their new freedoms.

Iraqi native Mohammed Al Farradh summed up: “It is exciting to be an American. I believe that America is bigger than whoever is in office.”