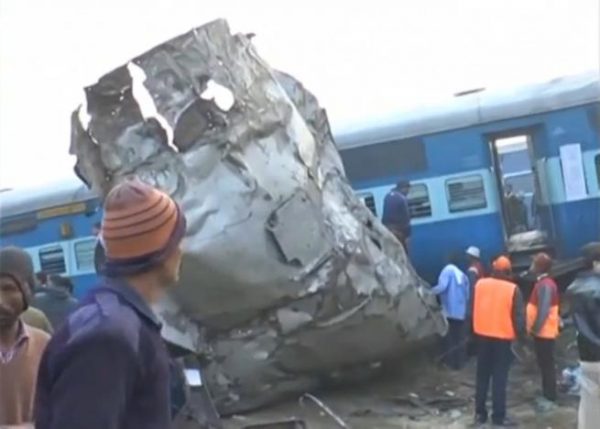 A view of a derailed train in Kanpur, in India’s northern state of Uttar Pradesh, in this still image taken from video November 20, 2016. ANI/via REUTERS TV
Share:

At least 60 people were killed and 80 injured when several carriages of an Indian train derailed in northern Uttar Pradesh, the nation’s most populous state, in the early hours of Sunday, senior railway officials said.

Fourteen carriages of the train, traveling between the northeastern city of Patna and the central city of Indore, were thrown off track in Pukhrayan, 65 kilometers south of Kanpur city, according to railway officials.

Two senior police officials in Kanpur said their teams have been able to pull out 60 bodies from the badly damaged carriages.
Suresh Prabhu, India’s Railways Minister, said in a tweet the government would immediately investigate the causes of the derailment and promised accountability with the “strictest possible action.”

India’s creaking railway system is the world’s fourth largest, ferrying more than 20 million people each day, but it has a poor safety record, with thousands of people dying in accidents every year.

The nation suffers frequent train derailments, sometimes with tragic consequences, including another train accident in Uttar Pradesh in March last year that killed 39 people and injured 150.

“Anguished beyond words on the loss of lives due to the derailing of the Patna-Indore express. My thoughts are with the bereaved families,” Modi said.