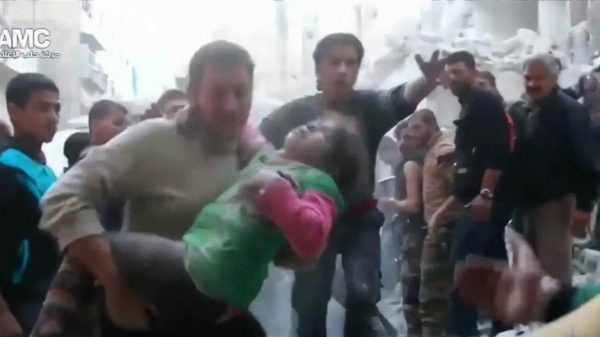 The exclusive CCTV video shows the interior and exterior of the pediatric facility in rebel-held eastern Aleppo, as it was hit by the bomb on Friday.

The Syrian government has stepped up its bombardment of besieged eastern Aleppo – an onslaught that began last week when Syria’s ally Russia announced its own offensive on opposition-controlled parts of the country. Since then, more than 100 people have been killed across northern Syria.

On Friday alone, airstrikes hit four hospitals in east Aleppo, effectively rendering all hospitals in the enclave of 275,000 people out of service, according to the opposition’s Aleppo Health Directorate and the World Health Organization.

The dramatic footage shows what appears to be a waiting room at the hospital as people milled about, including nurses in blue uniforms. The airstrike then hits, turning the room into a swirl of gray dust. Debris is strewn around and part of the false ceiling collapses.

Another CCTV camera shows what appears to be the street outside the hospital before the attack. A man is seen walking on the street. A second later, there is a huge explosion and an orange fireball. The footage was provided by the Independent Doctors Association (IDA), a Turkey-based NGO founded by Syrian doctors supporting a number of medical facilities in Aleppo.