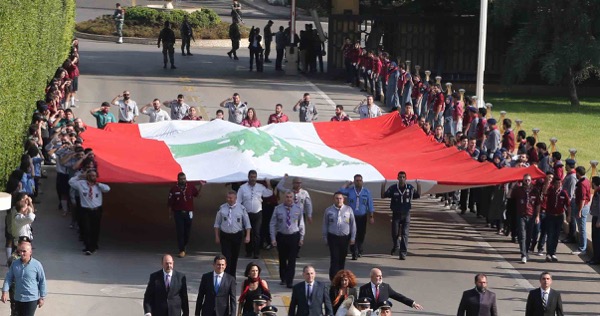 The newly elected Lebanese President Michel Aoun held a ceremony at the Presidential Palace in Baabda on Sunday to celebrate the country’s Flag Day.

An enormous flag, 15 meters in height and 10 meters in  width (nearly 50ft x 33 ft) was displayed inside the palace’s courtyard.

The flag, which was divided into five sections, representing Lebanon’s geographic regions, was filled with signatures from Lebanese people.

During a speech, Aoun called on all Lebanese to come to the palace to sign the national flag, which represented unity in the face of division.

“Lebanon was divided and every militia had its own special flag. The people’s house was the only [place] that raised the Lebanese flag,” Aoun said, referring to the Lebanese 15-year civil war.

Flag Day falls on Nov. 21, one day before the Independence Day, as decided by caretaker Telecommunications Minister Boutros Harb, then minister of national education, in 1979.

The presence and position of the Cedar tree in the middle of the flag is directly inspired by the mountains of Lebanon cedar . The Cedar is a symbol of holiness, eternity and peace.