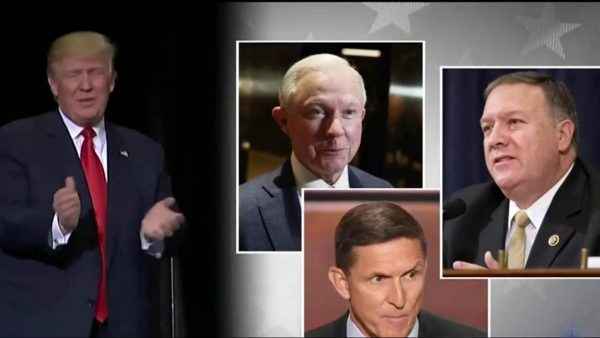 The naming of Trump’s picks for attorney general, CIA director and national security adviser drew public condemnations from Muslim civil rights groups as well as private expressions of concern from several Arab states that ­cooperate closely with the United States in the fight against the Islamic State and other terrorist groups. Some current and former government officials worried that the appointments could reinforce perceptions among the world’s Muslims that the United States is at war against Islam itself.

American civil rights organizations and faith leaders said Friday they were disturbed by Trump’s appointment of retired Lt. Gen. Michael T. Flynn to be his top national security adviser. Flynn, a former head of the Defense Intelligence Agency, has repeatedly referred to Islam as “a cancer,” claimed that a “fear of Muslims is rational” and warned — despite a lack of evidence — that Sharia or Islamic law is spreading throughout the United States.

Sen. Jeff Sessions (R-Ala.), the president-elect’s designee for attorney general, has supported Trump’s call for a temporary ban on Muslim immigrants and has suggested that a “toxic ideology” lies at the root of Islam. And Rep. Mike Pompeo — Trump’s pick for CIA director — has co-sponsored a bill to ban the Muslim Brotherhood, an Egypt-based Islamist organization that conspiracy theorists on America’s far right have accused of plotting to infiltrate the government.

The elevation of Flynn, Sessions and Pompeo to key positions triggered a rash of Googling in Middle Eastern capitals, where none of the three is particularly well known. But what seemed quickly apparent was that all “carry a clear hawkish line against Islam” — something that could complicate regional efforts to battle terrorist groups, said Marwan Muasher, a former Jordanian ambassador to the United States.

“While the region has the same commitment to fight terrorism, it needs a nuanced view of Islam and of Muslims, rather than treating all Muslims with a broad brush,” said Muasher, now vice president for studies at the Carnegie Endowment for International Peace, a think tank. “The cause of fighting terrorism will not be helped if the new administration treats the Muslim world as a problem rather than as part of the solution.”

“All Americans should be really concerned,” said Talib M. Shareef, who serves as imam and president of Washington’s Masjid Muhammad, the capital’s oldest mosque. An Air Force veteran, Shareef said he worried that the appointments would alienate allies as well as American Muslims serving in the armed forces and in government.

Five of Shareef’s children are active-service military, and they have already experienced discrimination while in uniform, he said. “When you’re needed but you’re not made to feel comfortable, it’s going to be difficult for you to give 100 percent. . . . You are not going to excel at whatever you’re needed in. And we need everybody.”

“We need them, and they need us,” he said. “I don’t care how powerful we say we are as a military, we will never be able to fight the battles on our own.”

The Trump transition team dismissed the concerns. “President-elect Trump will surround himself with talented individuals who will be uniquely qualified to enact the agenda set forth by the Administration. As a leader who will unite Americans of all backgrounds, President-elect Trump was elected on his vision to fight for everyone and will have one of the most inclusive presidencies in history,” the team said in an emailed statement.

Trump’s picks have largely echoed the views of the president-elect himself, who at various points in the campaign called for religious tests for immigrants as well as surveillance of American mosques. Terrorism experts and human rights groups have warned that such rhetoric drives support for extremist groups by making Muslim citizens feel unwelcome in their own country.

“The danger is that they’re going to pass legislation that not only alienates Muslim countries on which we depend for our security, but also it may alienate American Muslims and push them in the direction of our enemies,” said Richard Cohen, president of the Southern Poverty Law Center.

Both Flynn and Sessions have dismissed criticisms of their views on Islam as oversimplifications. In his 2016 book, “The Field of Fight: How We Can Win the Global War Against Radical Islam and Its Allies,” Flynn distinguishes between radical Islamists and ordinary Muslims, though he at times resorts to harsh terms in describing the fight against the former. He calls Islam a “political ideology” disguised as a religion.

“We’re in a world war against a messianic mass movement of evil people, most of them inspired by a totalitarian ideology: Radical Islam,” he writes.

Flynn joined the board of Act for America, an alt-right activist group that has helped introduce bills to ban Islamic Sharia law in nearly two dozen U.S. states, shortly after he joined the Trump campaign. Act for America’s founder, Brigitte Gabriel, has assailed a “cancer called Islamofacism” that permeates a Muslim world in which “extreme is mainstream.”

Sessions has repeatedly blasted the Obama administration over its policies for admitting Syrian refugees into the country and suggested that a religious test could be part of the process for determining who is admitted as an immigrant.

“We have to understand that most Muslims do not adhere to this extreme ideology, but there is nothing wrong to refuse admittance to those who distance themselves from our values,” Sessions told the American Thinker, a conservative magazine. “We need to use common sense with the who-what-where of the threat: It is the toxic ideology of Islam.”

Ibrahim Hooper, spokesman for the Council on American-
Islamic Relations, likened such views to a “kind of raw bigotry that would disqualify anyone from serving in public office.”

“Why it’s okay to be an anti-Muslim bigot and have a powerful post in the administration is a mystery,” Hooper said. Of Flynn, whom Hooper described as “beyond the pale,” he said: “He should not be in public office. We can only imagine what policies will flow from the fact that he believes Islam is a cancer, and that he’s been at war with Islam.”

Pompeo was not an outspoken Trump supporter during the presidential campaign and has been generally more measured in his views on immigration. But following the Boston Marathon attacks in 2013, he accused Muslim American leaders of being “potentially complicit” by failing to condemn extremist views more forcibly. Trump has gone further, repeatedly accusing American Muslims during his campaign of knowing about terrorists in their midst.

A PAC allied with the Democratic Party on Friday accused Flynn of violating federal law by failing to register with the Justice Department as a “foreign agent” under the Foreign Agents Registration Act (FARA). The Democratic Coalition Against Trump said Flynn signed a contract in September to lobby on behalf of a Dutch company with close ties to the Erdogan government.

Soner Cagaptay, director of the Turkish Research Program at the Washington Institute for Near East Policy, a Washington think tank, also said that support among the Middle East’s strongmen could wane if Trump follows through with policies that explicitly target Muslims.

“Erdogan is an authoritarian populist, and there was jubilation over Trump’s presidency because he saw a similar style of politics on the rise in the United States,” Cagaptay said. “But if the administration implements policies to register Muslims or to take other discriminatory action, it’s going to be very hard for Erdogan to swallow that.”