Assad: Trump would be a ‘natural ally’ 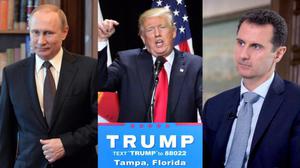 Bashar al-Assad has said in an interview that Donald Trump will be a “natural ally” if the US president-elect fulfills his pledge to fight “terrorists”.

In his first reaction to Trump’s election victory last week, the Syrian president struck a note of caution and said he was unsure Trump would be able to keep his word and step up the fight against jihadists.
“We cannot tell anything about what he’s going to do, but if … he is going to fight the terrorists, of course we are going to be ally, natural ally in that regard with the Russian, with the Iranian, with many other countries,” he told Portugal’s RTP state television.

Asked about Trump’s campaign comments suggesting the US should focus more on fighting the Islamic State group, Assad said he would welcome such a move but was cautious.

“I would say this is promising, but can he deliver?” said Assad, who was speaking in English.

“Can he go in that regard? What about the countervailing forces within the administration, the mainstream media that were against him? How can he deal with it?” he said.

“That’s why for us it’s still dubious whether he can do or live up to his promises or not.

“That’s why we are very cautious in judging him, especially as he wasn’t in a political position before,” said Assad.

The US leads an international coalition that is conducting airstrikes against ISIS jihadists in Syria and neighbouring Iraq, and also backs rebels fighting the Assad regime.

In an interview with the New York Times on 26 March, Trump said he thought “the approach of fighting Assad and Isis simultaneously was madness, and idiocy”.

“You can’t be fighting two people that are fighting each other, and fighting them together. You have to pick one or the other,” said Trump.

After his election victory, Trump told the Wall Street Journal: “I’ve had an opposite view of many people regarding Syria”.

He also said that if the US attacks Assad “we end up fighting Russia”.

In his interview with RTP, Assad accused the US of interfering in the affairs of other countries.

Asked to give his assessment of the next UN chief, Antonio Guterres of Portugal, Assad insisted the “United Nations is not the secretary-general” even if the role is “important”.

“The United Nations is the states within this organisation, and to be frank, most of the people say only the five permanent members” of the UN security council, said Assad.

“If you ask me ‘what do you expect from such a new official in that important position,’ I would say I need two things: the first one is to be objective … The second one … is not to turn his office into a part or branch of the state department of the United States.

The Syrian president went on to criticise his Turkish counterpart Recep Tayyip Erdoğan, describing him as a “sick person”.
“He’s [a] megalomaniac … He’s out of touch with the reality,” said Assad.

Turkey has embarked on an ambitious operation inside Syria dubbed “Euphrates Shield” to support Syrian opposition fighters in a bid to remove Isis fighters from its border and stop the advance of Syrian Kurdish militia.

The conflict in Syria has killed more than 300,000 people since it started in March 2011 with anti-regime protests.

Syria’s main opposition has urged Trump to protect civilians and help end the bloodshed in the country.