After Trump chat, Putin’s airstrikes pound Syria including a hospital west of Aleppo 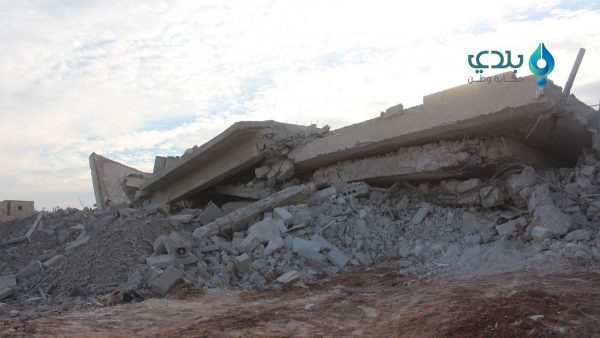 “Today we started a large-scale operation to deliver massive fire on the positions of the Islamic State and Jabhat al-Nusra in the provinces of Idlib and Homs,” Defense Minister Sergey Shoigu said at a meeting Tuesday with Putin and Russian defense industry representatives.

The Syrian Observatory for Human Rights said airstrikes shook the provinces of Idlib and beleaguered Aleppo, which has been the focal point in a five-year war between U.S.-backed rebels and troops loyal to Russian-backed Syrian President Bashar Assad. The Syrian military said it had hit targets inside Aleppo, ending a month-long pause in strikes in the rebel-held city.

“Our houses are shaking from the pressure. Planes are soaring above us, and the bombardment is around us,” Modar Shekho, a resident of rebel-held eastern Aleppo, told Reuters.

The airstrikes drew a sharp rebuke from Sen. John McCain, R-Ariz., chairman of the Senate Armed Services Committee, who said Putin “has rejoined Bashar Assad in his barbaric war against the Syrian people.”

Trump, who expressed respect for Putin during the campaign, spoke with the Russian leader by phone Monday. The two leaders discussed a range of issues including “threats and challenges facing both nations,” the Trump transition team said in a statement.

The Kremlin said Putin congratulated Trump on his election triumph, adding that the leaders agreed on “uniting efforts in the fight with the common enemy No. 1 – international terrorism and extremism.” The Kremlin also pledged to build a relationship based on mutual respect and non-interference.

Secretary of State John Kerry on Monday discussed Aleppo with Russian Foreign Minister Sergey Lavrov, emphasizing the State Department position that the solution must be political, not military. Hours later the airstrikes began.

Shoigu said the airstrikes are focused on ammunition depots, groups of terrorists and their training centers and facilities being used to manufacture weapons of mass destruction. He said Russia had sent radiation, chemical and biological protection troops to determine the toxic substances used by terrorists.

Some of the strikes appeared to target al-Qaeda affiliates fighting alongside the rebels, the observatory said. An airstrike also hit a hospital in the town of Awejel just outside Aleppo, injuring civilians, the British-based advocacy group said. Russian and Syria denied targeting hospitals.

Jabhat al-Nusra is an al-Qaida affiliate loosely aligned with the U.S-backed rebels. Russia has blamed rebel ties to terror groups for the dire humanitarian issues in Aleppo. The State Department has acknowledged that “marbleization” of the anti-Assad forces has been a problem.

Years of war have left Syria, and particularly Aleppo, in crisis. The United Nation’s World Food Program reported Monday that food production in Syria has hit a record low as “widespread insecurity and unfavorable weather conditions in parts of the country continued to hamper access to land, farming supplies and markets.”

“People are scared. The bombardment is intense,” al-Halaby told AP.