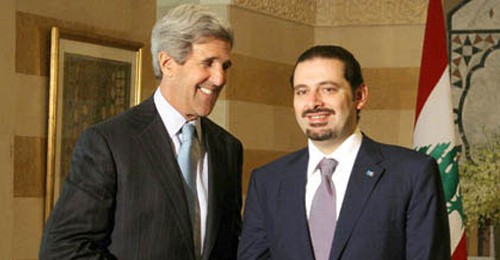 U.S. Secretary of State John Kerry  congratulated former Lebanese PM Saad Hariri on “the role that he played to put an end to the presidential vacuum,” Hariri’s office reported on Tuesday.

“Former PM Saad Hariri received a phone call this afternoon from U.S. Secretary of State John Kerry during which he congratulated him on the election of General Michel Aoun as president and on the role that he played to put an end to the presidential vacuum,” Hariri’s office said in a statement.

Hariri for his part told Kerry that he is “optimistic” that the election will “allow a reactivation of state institutions” in order to “confront the various challenges that Lebanon and the Lebanese are facing.”

Iran also welcomed the election of Michel Aoun as Lebanon’s new president on Monday, but  it called his election a victory for the Shiite group Hezbollah, without giving any credit for Hariri or Lebanese Forces leader Samir Geagea.

Speaker Nabih Berri, a key ally of Hezbollah and Iran and who voted against  Aoun’s presidential bid  slammed reports claiming that the agreement to elect Aoun was a hundred percent Lebanese decision and said that it was “probably” the result of an Amercian-Iranian deal,” al-Akhbar daily reported on Monday.

Aoun was tipped to become president after  Hariri formally endorsed his nomination earlier this month.