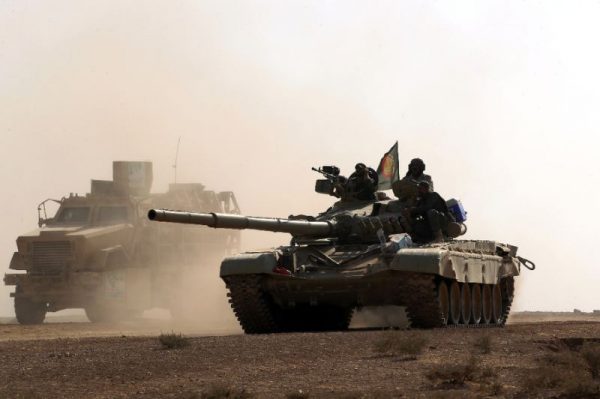 Iraqi forces are expected to try to open safe corridors for the million-plus civilians
Share:
Iraqi forces fought their way into jihadist-held Mosul on Tuesday as a top commander said the “true liberation” of the city from the Islamic State group had begun.

Just over two weeks into the massive offensive to retake Mosul — IS’s last major stronghold in Iraq — the army said its forces had managed to push within city limits.

Troops had “entered the Judaidat Al-Mufti area, within the left bank of the city of Mosul,” the Joint Operations Command said in a statement.

Mosul is split by the Tigris River, with the eastern half of the city known as the left bank. Judaidat al-Mufti is on the southeastern side of the city.

Elite Iraqi forces had also recaptured the key village of Gogjali and taken control of a television station building on the eastern edge of the city.

Fighters from the US-trained Counter-Terrorism Service (CTS) had pushed into the area amid heavy fighting on the eastern front over the past two days.

“Now is the beginning of the true liberation of the city of Mosul,” Staff General Taleb Sheghati al-Kenani, the commander of CTS, told Iraqiya state television from Gogjali.

Backed by air and ground support from a US-led coalition, tens of thousands of Iraqi fighters are converging on Mosul.

Since the offensive was launched on October 17, federal forces and Kurdish peshmerga fighters have retaken a series of villages as they advance on the city from the north, east and south.

As his forces advanced, Iraqi Prime Minister Haider al-Abadi warned the jihadists they would have no place to run.

“We will close in on (IS) from every place,” he said on state television on Monday, dressed in a camouflage uniform.

Some 4,000 to 7,000 jihadists are believed to be in and around Mosul, where IS chief Abu Bakr al-Baghdadi declared the group’s cross-border “caliphate” after the group seized control of large parts of Iraq and neighbouring Syria two years ago.

For now the jihadists do have an escape route — to the west towards IS-controlled territory in neighbouring Syria.

Paramilitary forces from the Hashed al-Shaabi (Popular Mobilisation), an umbrella organisation dominated by Iran-backed Shiite militia, launched an assault at the weekend to cut off that route.

They have been advancing north, their sights set on the town of Tal Afar which commands the city’s western approaches.

On the northern and eastern sides of Mosul, peshmerga forces from the autonomous Kurdish region have taken a series of villages and towns and consolidated their positions.

To the south, federal forces, backed by coalition artillery units stationed in the main staging base of Qayyarah, have been pushing north.

They have the most ground to cover and are still some distance from the southern limits of Mosul.

Iraqi forces are expected to try to open safe corridors for the million-plus civilians still believed to be inside.

Humanitarian organisations have been fighting against the clock to build up the capacity to handle the possible mass exodus from the city.

The United Nations says up to a million people could be displaced in the coming weeks.

More than 17,900 people have already fled their homes since the operation began, according to the International Organisation for Migration.

IS has been losing ground steadily in Iraq since 2015 and the outcome of the Mosul battle is in little doubt, but commanders have warned it could last months.

If the city is retaken, only Raqa in Syria will remain as the last major city under the jihadists’ control.