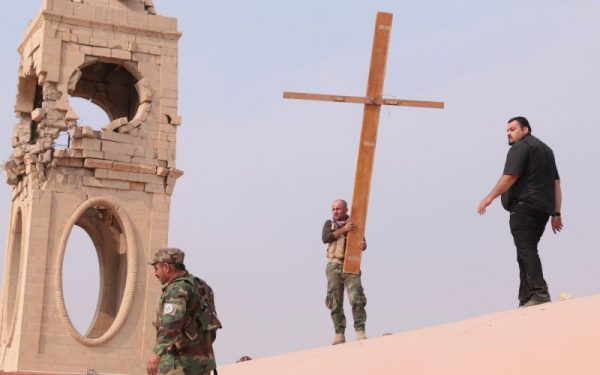 ISIS forced the Christians of the Nineveh plain around Mosul to flee. Now they are returning, but in the key town of Qaraqosh, the fighting rages on.
Share:
As the coalition battling the Islamic State (IS) group pushes towards Mosul, Christian towns and villages in the surrounding region are being liberated. But the future is still unclear for those returning to Qaraqosh, Iraq’s largest Christian town.

Father Cherbel is returning to Qaraqosh, Iraq’s largest Christian-majority town, which lies around 20 miles east of Mosul. Wearing a white soutane and a cross around his neck, the priest is all smiles as he greets an Iraqi army commander and his soldiers at the church gates.

But the cheery grin is deceiving. “It’s the first time I’m returning to Qaraqosh. I don’t feel very free – not yet anyway,” Father Cherbel admits.

More than two years after he fled Qaraqosh following its fall to IS group militants, Father Cherbel is returning to a shattered town. Bullet holes pockmark some buildings, others have collapsed, and sporadic gunfire can still be heard as Iraqi troops conduct a house-to-house operation, flushing out hiding jihadists and detonating explosives left behind by IS fighters.

Qaraqosh is the oldest Christian town in Iraq, home to a number of ancient churches, chapels and monasteries. The Christian population, mostly from the Assyrian Christian Church which has close links to the Vatican, still use Aramaic– the language that Jesus of Nazareth is believed to have spoken – during their services.

Iraq’s Christian community has survived battles and conquests throughout the centuries and many members are determined not to abandon their ancient homeland. But the latest wars are seeing their numbers dwindle.

Before the fall of former dictator Saddam Hussein, there were an estimated 1.5 million Iraqi Christians, primarily in the north. Their numbers have since dwindled to around 500,000, but probably even less. In Qaraqosh itself, there were around 50,000 Christians living in the city before the IS group seized control. Nobody knows how many will return.

At an ancient monastery in Qaraqosh, sculptures of the Virgin Mary and Christian saints have been defaced. In the chapel, Christian texts have been replaced by the Koran and tracts put out by the IS group’s propaganda unit. An Iraqi soldier points to an IS group message scrawled on the chapel walls, picks up a jihadist booklet and flings it down in disgust. “Their behaviour dishonours Islam,” he says sadly, shaking his head in despair.

Qaraqosh was liberated earlier this month by the Iraqi army’s 9th Armoured Division and a Christian militia known as the Nineveh Protection Unit. Following the June 2014 fall of Mosul and subsequent collapse of the Iraqi army, a number of Christians answered calls to oust the IS group from the region.

Iraqi Christians who fled to Kurdish areas formed militias under the control of the Kurdish Peshmerga Ministry, while other Christian militias operate under the Hashd al-Shaabi, or Popular Mobilization Units, a loose alliance of militias – primarily Shiite – that are also part of the anti-IS coalition.

Weeks after the launch of the military operation to retake Mosul, the coalition – united by the offensive against a common enemy – is holding together. But in a divided country such as Iraq, different groups are already making their post-war plans. Old tensions – such as competing territorial claims by Iraq’s Kurds and Arabs as well as power-sharing disputes between Shiites and Sunnis – are simmering under the surface.

In this mix of competing interests, the ultimate goal of Iraq’s tiny Christian community, now armed, is still unclear. For now, community leaders such as Father Cherbel are happy just to return to their churches and start the slow process of rebuilding their desecrated sites.