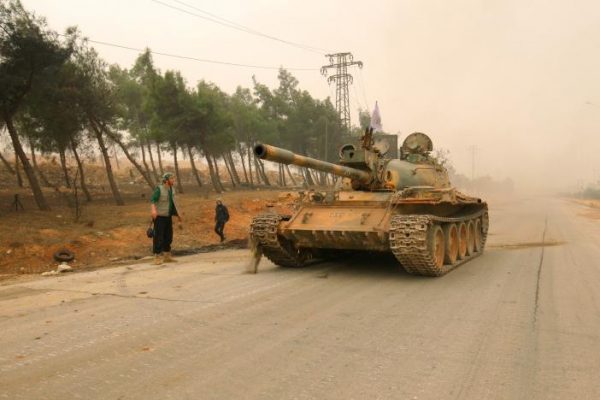 Syrian rebels including jihadists began a counter-attack against the army and its allies on Friday aiming to break a weeks-long siege on eastern Aleppo, insurgents said.

The assault, employing heavy shelling and suicide car bombs, was mainly focused on the city’s western edge by rebels based outside Aleppo. It included Jabhat Fateh al-Sham, a former affiliate of al Qaeda previously known as the Nusra Front, and groups fighting under the Free Syrian Army (FSA) banner.

The Syrian Observatory for Human Rights, a British-based war monitor, said more than 15 civilians had been killed and 100 wounded by rebel shelling of government-held western Aleppo. State media reported that five civilians were killed.

There were conflicting accounts of advances in areas on the city’s outskirts.

The city has been divided for years between the government-held western sector and rebel-held east, which the army and its allies put under siege this summer and where they launched a new offensive in September that medics say has killed hundreds.

Photographs showed insurgents approaching Aleppo in tanks, armored vehicles, bulldozers, make-shift mine sweepers, pick-up trucks and on motorcycles, and showed a large column of smoke rising in the distance after an explosion.

Rebels said they had taken several positions from government forces and the Observatory said they had gained control over a checkpoint at a factory in southwest Aleppo and some other points nearby.

But a Syrian military source said the army and its allies had thwarted what he called “an extensive attack” on south and west Aleppo. A state television station reported that the army had destroyed four car bombs.

Abu Anas al-Shami, a member of the Fateh al-Sham media office, told Reuters from Syria the group had carried out two “martyrdom operations”, after which its fighters had gone in and had been able to “liberate a number of important areas”. A third such attack had been carried out by another Islamist group.

A senior official in the Levant Front, an FSA group, said: “There is a general call-up for anyone who can bear arms.”

“The preparatory shelling started this morning,” he added.

Fateh al-Sham played a big part in a rebel attack in July that managed to break the government siege on eastern Aleppo for several weeks before it was reimposed.

Abu Youssef al-Mouhajir, an official from the powerful Ahrar al-Sham Islamist group, said the extent of cooperation between the different rebel factions was unusual, and that the largest axis of attack was on the western edge of the city.

“This long axis disperses the enemy and it provides us with good cover in the sense that the enemy’s attacks are not focused,” he said.

The powerful role played by Jabhat Fateh al-Sham, listed by many countries as a terrorist group, has complicated Western policy toward supporting the anti-Assad opposition.

The United States has prevented more powerful weapons such as anti-aircraft missiles from being supplied to rebels partly out of fear they could end up in jihadist hands.

The Syrian military source said Friday’s attack had been launched in coordination with Islamic State, a group against which all the other rebels, including Fateh al-Sham, have fought.

Islamic State fighters did clash with the Syrian army on Friday at a government-held airbase 37km (23 miles) east of Aleppo, next to territory the jihadist group already controls, the Observatory reported.

Syria’s civil war, now in its sixth year, has killed hundreds of thousands of people, displaced half the country’s pre-war population, dragged in regional and global powers and caused a refugee crisis in the Middle East and Europe.

Mouhajir, the Ahrar al-Sham official, said cloudy weather was helping to reduce the aerial advantage enjoyed by the Syrian military and its Russian allies. Inside Aleppo, tyres were also burnt to create a smokescreen against air strikes.

Grad rockets were launched at Aleppo’s Nairab air base before the assault began said Zakaria Malahifji, head of the political office of the Aleppo-based Fastaqim rebel group, adding that it was going to be “a big battle”.

The Observatory also said that Grad surface-to-surface rockets had struck locations around the Hmeimim air base, near Latakia.