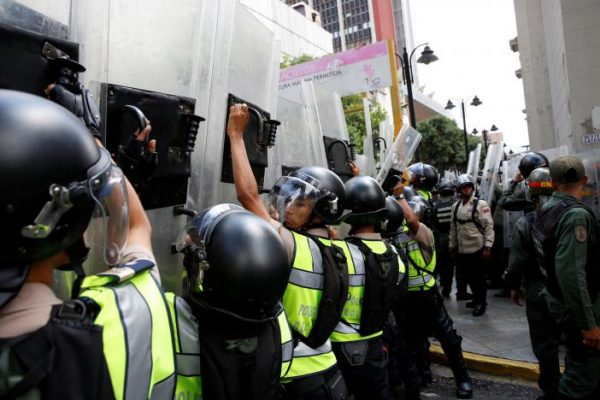 Riot police officers rise their shields as they escort people walking out from the National Assembly after a session in Caracas, Venezuela October 27, 2016. REUTERS/Carlos Garcia Rawlins
Share:
Venezuela’s increasingly militant opposition stepped up its push to oust leftist leader Nicolas Maduro on Wednesday with protests that drew hundreds of thousands but also saw unrest leading to dozens of injuries and arrests.

In an incident sure to inflame the already polarized situation, a policeman died after being shot on Wednesday night in central Miranda state.

The government blamed opposition activists clashing with security forces on a highway out of Caracas. The local police force of Miranda, whose governor is opposition leader Henrique Capriles, confirmed the death but did not link it to protesters.

Enraged by last week’s suspension of their push for a referendum to remove Maduro and determined to end 17 years of socialism in the South American OPEC nation, Venezuela’s opposition has sharply ramped up its tactics in recent days.

After launching a political trial against Maduro on Tuesday in the National Assembly, the opposition coalition held nationwide marches dubbed “Takeover of Venezuela” on Wednesday.

“This government is going to fall!” crowds chanted, many wearing white and waving national flags as they congregated at nearly 50 sites across the country.

“This needs to keep growing so that the government understands once and for all that we’re doing this for real,” said two-time presidential candidate Capriles, blaming authorities for what he said were over 120 people injured and some 147 protesters detained.

Clashes occurred in several cities outside Caracas, witnesses said, including the Andean city of Merida and the volatile western town of San Cristobal that was an epicenter of violence during 2014 anti-Maduro protests.

Rights group Penal Forum said there were over 140 people detained nationwide. The government gave no figures on injuries or detentions.

Coalition leaders called for a national strike for Friday, and a Nov. 3 march to the Miraflores presidential palace in Caracas, unless the election board allows the referendum.

Maduro, the unpopular 53-year-old successor to Hugo Chavez who has presided over an unprecedented economic crisis, accuses the opposition of seeking a coup with U.S. help and has vowed there will be no plebiscite on his rule.

“They are desperate, they have received the order from the north to destroy the Venezuelan revolution,” he told a counter-march of red-shirted government loyalists.

Despite sitting on the world’s biggest oil reserves, Venezuela is in the throes of a punishing recession that has many poor families skipping meals amid scarce food and triple-digit inflation.

Foes say Maduro, a former bus driver and union leader who narrowly won election after Chavez’s death in 2013, is an incompetent autocrat who is to blame for the economic problems.

“I’m not scared of protesting. It’s the food lines that scare me, that’s where you see all the misery,” said health worker Auly Gonzalez, 36, as she and hundreds of others in the Punto Fijo city on a Caribbean peninsula marched to a naval base.

Maduro says low oil prices and a U.S.-led “economic war” against him are responsible for the recession, and has vowed to stand firm. “Maduro is not leaving!” several thousand supporters chanted at the government rally.

In apparent tactics to impede the opposition demonstrations, authorities set up roadblocks and closed some underground metro stations in Caracas. Reuters journalists in several cities reported big crowds at the opposition rallies, especially in the capital, collectively numbering hundreds of thousands.

Wary of trouble, many businesses stayed shut and some parents kept children away from school. In San Cristobal, masked protesters threw rocks and petrol bombs in clashes with security forces and attacked the local headquarters of the electoral council in an attempt to burn it down, the body said.

Just back from a tour of major oil-producing countries plus meetings with the Pope and U.N. Secretary General-designate Antonio Guterres, Maduro said his opponents were trying to reprise a brief 2002 putsch against Chavez.

“In Venezuela there will neither be a coup d’etat nor a gringo intervention,” Maduro roared to supporters.

With Venezuela’s key oil sector under government control and the economy in a tailspin anyway, the opposition’s planned strike would be unlikely to have a major financial impact.

Opposition protests two years ago led to 43 deaths, including among security officials and government and opposition supporters. As a result, some Venezuelans are wary of demonstrations or see them as futile.

Venezuela’s poor have to prioritize the all-consuming task of finding affordable food, while many remain skeptical of the opposition, which has a reputation for elitism and whose internal squabbles have for years been a boon for “Chavismo.”

Maduro convened a special Committee for the Defense of the Nation at the presidential palace to analyze the National Assembly’s actions against him and a tentatively scheduled dialogue with the opposition this weekend.

Opposition leaders, however, said they would not attend talks until the government allowed the referendum to proceed.