IS group murdered at least 232 people near Mosul this week, says UN 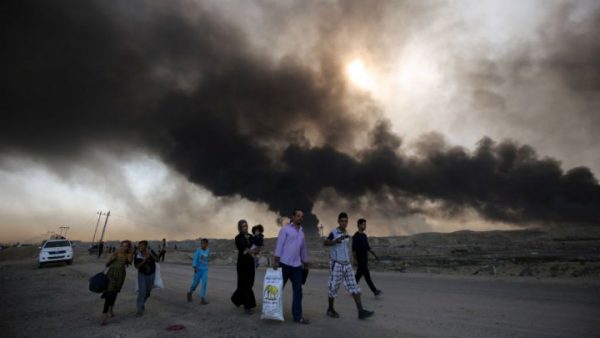 Ahmad al-Rubaye, AFP | Displaced Iraqi families arrive near a checkpoint east of Mosul as they flee areas of unrest, on October 22, 2016
Share:
Islamic State group fighters slaughtered at least 232 people in and around Mosul this week as Iraqi troops advanced on the city, the UN rights office said Friday.

“These reports have been corroborated to the extent possible,” she added, stressing that the number of people killed in recent days could be higher.

Shamdasani said the execution-style killings came as IS was pushing forward with its strategy of forcing people living near the northern Iraqi city into Mosul, the group’s last bastion in Iraq.

The rights office has said the jihadists aim to use these people as “human shields” in the ensuing battle for Mosul against US-backed elite Iraqi troops.

“ISIL has been forcing tens of thousands of people from their homes in some districts around Mosul,” Shamdasani said.

Those being executed have included civilians who have refused to comply with the relocation orders and those who previously worked for the government security services.
FRANCE24/AFP