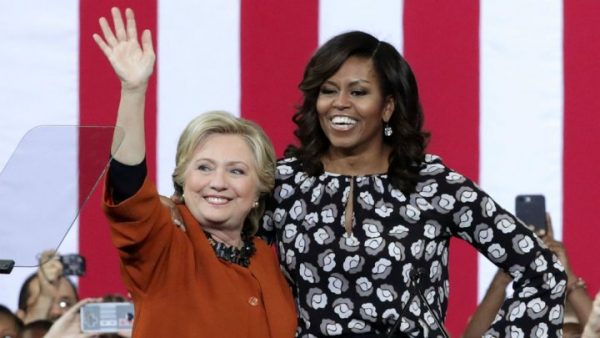 Obama has emerged as a compelling force in the hard-fought campaign, delivering powerful arguments against Republican Donald Trump and in support of Clinton’s bid to become the first female US president.

“She is ready to be commander-in-chief on Day 1, and yes, she happens to be a woman,” Obama said of the former first lady to a roar from a crowd of 11,000 people in North Carolina, one of the swing states in play.

Clinton has basked in the results of new polls showing the former secretary of state with an impressive lead just 12 days from the November 8 vote.

But new revelations about how former president Bill Clinton took in millions of dollars from “for profit” activities as he led the Clinton family’s non-profit foundation weighed on her campaign.

Michelle and Hillary joined forces on the trail for the first time at a rally at Wake Forest University in North Carolina, where early voting is already under way.

“First ladies, we rock!” said Obama, one of the most popular Democrats in America.

“Here’s where I want to get real. If Hillary doesn’t win this election, that will be on us,” the current first lady said, emphasizing that voter turnout is vital.

The 52-year-old wife of President Barack Obama has energized the Democratic camp with a series of speeches taking Trump to task for his strident rhetoric and for what she brands his “frightening” attitude towards women.

She warned that Trump’s strategy was “to make this election so dirty and ugly that we don’t want any part of it” and opt to stay home.

“Do not let yourself get tired or frustrated or discouraged by the negativity of this election, as you’re out there working your hearts out for my girl,” she said of Clinton.

North Carolina voted for Obama in 2008, then Republican nominee Mitt Romney in 2012, but the southeastern state is leaning back toward the Democratic side in 2016.

Clinton holds a two-point lead here and the state’s Republican leaders worry that Trump’s slow collapse will hurt them in congressional races.

“It doesn’t get any better than being here with our most amazing first lady,” Clinton said.

The latest rolling poll average compiled by tracker RealClearPolitics showed Clinton with a 5.8 point lead in a national race against Trump and two outsiders – pointing to a likely electoral college victory for the Democrat.

Trump’s standing has been hit hard, particularly among female voters, since the release earlier this month of a 2005 video in which he boasts that his celebrity allows him to grope women with impunity.

But the 70-year-old Manhattan real estate mogul took heart from a new survey that shows him with a two-point lead in Florida, a state where presidential races are often won and lost – and a must-win state for him.

“We don’t want to give this away,” a combative Trump promised supporters in battleground Ohio on Thursday.

The RealClearPolitics poll average still puts Clinton ahead in the Sunshine State by 1.6 percentage points, but she wants to lock it in.

The president, who narrowly won Florida in 2008 and 2012, campaigns for her there Friday, while Clinton is scheduled to join pop star Jennifer Lopez on stage Saturday in Miami.

Trump also appears to have clawed back ground in Nevada, where a new NBC News/Wall Street Journal poll has the western state in a dead heat.

As Clinton called on voters to rise above the nastiness of the race, new WikiLeaks disclosures threatened her campaign, notably an email in which aide Douglas Band detailed his own moneymaking efforts both on behalf of Bill Clinton personally and on that of the foundation.

Band wrote of helping the former president “secure and engage in for-profit activities – including speeches, books, and advisory service engagements.”

“If the Clintons were willing to play this fast and loose with their enterprise when they weren’t in the White House, just imagine what they will do if they are given the chance to control the Oval Office,” he said in a statement.