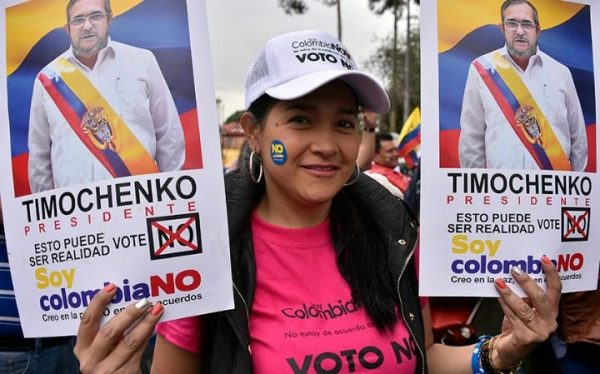 The surprise victory for the “no” camp poured cold water on international joy, from the White House to the Vatican, at what had seemed to be the end of the longest-running conflict in the Americas.

The “no” camp won by 50.21 percent to 49.78 percent. Voter turnout was only 37 percent, perhaps partly owing to torrential rain through the country.

Both sides in the war immediately sought to reassure the world they would try to revive their peace plan.

Santos, 65, said a ceasefire already negotiated would remain in place, that he would sit down on Monday with the victorious “no” camp to discuss the way forward, and send his chief negotiator back to Cuba to meet with FARC rebel leaders.

“I will not give up, I will keep seeking peace until the last day of my term because that is the way to leave a better nation for our children,” said Santos, who cannot seek re-election when his second term ends in August 2018.

The commander of the Revolutionary Armed Forces of Colombia, or FARC, known by his nom de guerre, Timochenko, gave a similar message from Havana, where peace negotiations have taken place over the last four years.

“The FARC reiterates its disposition to use only words as a weapon to build toward the future,” said Timochenko, whose real name is Rodrigo Londono. “To the Colombian people who dream of peace, count on us, peace will triumph.”

Santos recently said a “no” vote would mean a return to war, and opinion polls had predicted he would win comfortably.

Traditionally conservative Colombian voters, in favor of peace in principle but unhappy at perceived soft treatment for the guerrillas, confounded those forecasts.

Opponents of the pact believed it was too lenient on the FARC rebels by allowing them to re-enter society, form a political party and escape jail sentences.

“I voted no. I don’t want to teach my children that everything can be forgiven,” said Bogota engineer Alejandro Jaramillo, 35.

Opponents want a renegotiation of the deal with rebel leaders serving jail time and receiving no free seats in Congress.

“This is a clear message… I ask all citizens to trust we will know how to handle this situation without agitation. We’ll work with the government to remake this accord,” said former Vice President Francisco Santos, a prominent “no” supporter.

“No” voters appeared more highly motivated, and some Colombians may have felt pressured to tell pollsters they were voting for peace despite private doubts.

Regions still riven by the conflict, including poor areas along the Pacific and Caribbean coasts, voted resoundingly in favor of the deal, but formerly violent interior regions pacified during the presidency of former leader Alvaro Uribe backed the “no” camp.

Uribe, still an influential figure in Colombia with a large following, led the “no” camp and the result was a huge victory for him.

The rebels, whose numbers were halved to about 7,000 in recent years because of a U.S.-backed military offensive, had agreed to turn in weapons and fight for power at the ballot box instead.

Under the accord, the FARC, which began as a peasant revolt in 1964, would have been able to compete in the 2018 presidential and legislative elections and have 10 unelected congressional seats guaranteed through 2026.

It would also have given up its role in the lucrative illegal drug trade and taken part in reforming rural Colombia.

But controversially, many rebel leaders who ordered killings, bombings and displacements would have had to appear before a special tribunal that could sentence them to alternative punishments like clearing landmines.

For decades, the FARC bankrolled the longest-running conflict in the Americas through the illegal drug trade, kidnapping and extortion.

Battles between the guerrillas, paramilitaries, drug gangs and the army raged in the countryside, and there were atrocities committed on all sides.

The conflict took more than 220,000 lives and displaced millions of people. At one stage, the FARC was positioned close to the capital and the state was on the verge of collapse.

Supporters of the peace deal were stunned by the plebiscite result.

“How sad. It seems Colombia has forgotten about the cruelty of war, our deaths, our injured, our mutilated, our victims and the suffering we’ve all lived through with this war,” said Adriana Rivera, 43, a philosophy professor standing tearfully at the hotel of the “yes” campaign.

The vote was a disaster for Santos, who had hoped to turn his focus quickly to other matters including possible talks with the smaller ELN rebel group, a much-needed tax reform and other economic measures to compensate for a drop in oil income.

The government had hoped peace would lead to a boom in investment by commodities investors, in gold mines, oil and agriculture in Latin America’s fourth-largest economy.

After Sunday’s vote, companies will be rethinking the situation.

Although the “no” camp has broached the idea of fresh talks, the FARC has said no group sits at a negotiating table to agree to jail time.

“Today will be remembered by history as the moment Colombia turned its back on what could have been the end of a war that for more than 50 years devastated millions of lives,” said Erika Guevara-Rosas, Americas director for rights group Amnesty International. “Even though it was imperfect, the accord was a sure path to peace and justice.”