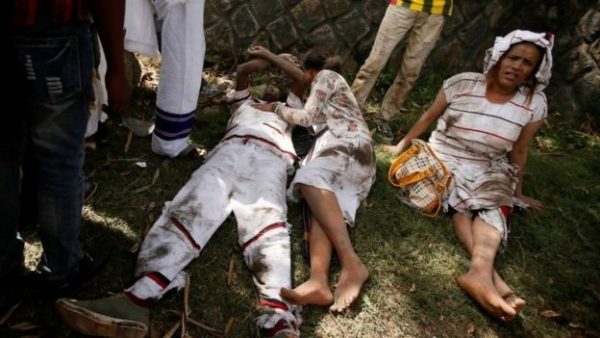 The US had already expressed concern about excessive use of force against protesters before Sunday’s violence
Share:
Fifty-two people died on Sunday at a religious festival in Ethiopia to celebrate the end of the rainy season after police fired tear gas at protesters triggering a stampede.

Violence broke out at the gathering in the town of Bishoftu near the capital Addis Ababa due to the actions of “irresponsible forces”, the regional government said in a statement, adding that “as a consequence, 52 people died in this crush.”

Opposition groups had said they believed more than 100 people had been killed in the chaos after thousands of people gathered at a sacred lake for the Irreecha (thanksgiving) ceremony, in which the Oromo community marks the end of the wet weather.

Ethiopia is facing its biggest anti-government unrest in a decade and some festival participants had crossed their wrists above their heads, a gesture that has become a symbol of protest by the Oromo community, according to an AFP photographer at the scene.

“The annual Irreecha festival has been disrupted due to a violence created by some groups… Loss of lives has occurred due to a stampede,” said a government statement published by state media earlier.

Merera Gudina, chairman of the opposition Oromo Federalist Congress, told AFP there had been many fatalities.

“Bodies are being collected by the government. But what I hear from people on the ground is that the number of dead is more than one hundred,” said Gudina.

Sunday’s event quickly degenerated into violence, with protesters throwing stones and bottles and security forces responding with baton charges and tear gas grenades, with some reports of gunfire.

The police action sent people fleeing in panic with many falling on top of each other into a ditch.

Police demanded that AFP’s photographer leave the scene, where rubber bullets were seen strewn on the ground.

Oromo activists called for “five days of rage” to protest the deaths while a strong police presence was visible as the news of the day’s events spread.

“This government is a dictatorship, there is no equality or freedom of speech. There is only TPLF. That’s why we must protest today,” said Mohamed Jafar, referring to the Tigrayan People’s Liberation Front.

In 1991 the TPLF, then a rebel group, overthrew Mengistu Haile Mariam’s dictatorship and now, as a political party stands accused of monopolising power.

Every year millions of people in the Oromo region mark the Irreecha festival on the shores of Lake Harsadi, which they consider sacred.

The anti-government protests started in the central and western Oromo region in 2015 and spread in recent months to the northern Amhara region.

“For the last 25 years the Oromo people have been marginalised in many things. Today we come together as one to chant for our freedom,” said one of the people at the festival, Habte Bulcha.

Together, Oromos and Amharas make up 60 percent of the population of the Horn of Africa nation and have become increasingly vocal in rejecting what they see as the disproportionate power wielded by the northern Tigrean minority in government and the security forces.