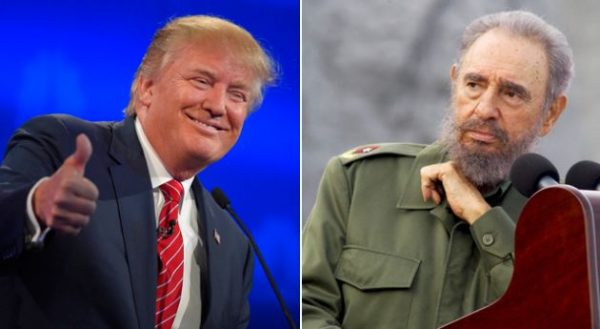 In a development that could cost Donald Trump crucial Cuban-American votes, his casino company once violated the U.S. embargo of Cuba by secretly funding a business foray on the communist island, Newsweek reported this morning.

Trump’s casino company “funneled” at least $68,000 in late 1998 to a consulting firm that traveled to the island in search of business opportunities on Trump’s behalf, Newsweek reported in its cover story called “The Castro Connection.” The article alleges the consultant then billed Trump’s company and instructed his employees on how to make it look as if the trip had been connected to a Catholic charity.
If the consulting company secretly spent U.S. money in Cuba during a visit that was not licensed by the U.S. government or fully hosted by a non-U.S. entity or charity, the expenses would have violated the Cuban embargo, which is designed to starve the Castro regime of American currency.
Newsweek did not specify the exact nature of the trip or its precise date. Even if a crime occurred, the statute of limitations expired, Newsweek reported.

“Trump’s business with Cuba appears to have broken the law, flouted U.S. foreign policy, and is in complete contradiction to Trump’s own repeated, public statements that he had been offered opportunities to invest in Cuba but passed them up,” Clinton campaign senior adviser Jake Sullivan said in a statement. “This latest report shows once again that Trump will always put his own business interest ahead of the national interest — and has no trouble lying about it.”

Trump’s campaign has not commented since Wednesday night, when the allegations first surfaced. But his former presidential rival and current political ally, Sen. Marco Rubio, expressed misgivings about the claims.

“The article makes some very serious and troubling allegations,” Rubio, a pro-embargo anti-Castro hardliner, told POLITICO Florida in a written statement. “I will reserve judgment until we know all the facts and Donald has been given the opportunity to respond.”

U.S.-Cuba Trade and Economic Council President John Kavulich, agreed with Rubio that the allegations are problematic. Speaking by phone from Havana, Kavulich told POLITICO Florida that an emissary from Trump’s organization in the mid- to late-1990s approached him in his New York office to discuss business opportunities in Cuba.

“We were approached by a Trump Organization senior executive who visited my office, and we have the correspondence in our file, where the organization was interested in exploring potential opportunities in Cuba,” Kavulich said.

Bloomberg in July reported that Trump Organization officials in 2012 and 2013 visited the island exploring golf-course developments in Cuba.

Now that Trump is again espousing a hard line on Cuba publicly, the revelations of the multiple times an emissary quietly inquired about profiting from the Castro government – and apparently violated the trade embargo that he supports – come at a difficult time for the GOP presidential nominee.

Trump recently began making a big push to curry the support of Cuban-Americans who live in Miami-Dade, Florida’s most populous county with the most Republicans, 366,000. About 72 percent of them are Hispanic, nearly all Cuban-American. They’re one of the only blocs of voters in the United States who still favor keeping the embargo and who oppose President Obama’s rapprochement with the Castro government.

Trump bashed Obama’s Cuba policy at a Miami event earlier this month after appearing to strike a softer tone the year before. Trump returned Monday to Miami for a rally before an enthusiastic Cuban-American crowd. Without major Cuban-American support, Trump risks losing swing-state Florida, where polls show he’s essentially tied with Hillary Clinton.

The Miami-area’s four Republican members of Congress — Rubio and House members Ileana Ros-Lehtinen, Mario Diaz-Balart and Carlos Curbelo — all favor the embargo and were unable or unwilling to immediately comment Wednesday and early Thursday on the Newsweek allegations.

“We’ll have to see what facts are presented, but nothing about this campaign season surprises me anymore,” Curbelo, an early critic of Trump, told POLITICO Florida.

He and Ros-Lehtinen are among the numerous Republican leaders in Miami-Dade who say they can’t support Trump, in part because of his inflammatory rhetoric about immigration reform.

Diaz-Balart — who said he wants to endorse his party’s nominee if he would only make his foreign-policy positions clearer — told POLITICO that “Trump in the past and now has made some very strong and clear statements about Cuba … and any allegations that would contradict his very clear position I have not yet seen.”

Two years after President Clinton signed Helms-Burton, Trump was trying to strike a casino deal with the Seminole Tribe of Florida along with a business associate, Richard T. Fields – who controlled the Seven Arrows consulting firm at the center of Newsweek’s cover story. To win state approval for the venture, Trump hired lobbyists and even steered $50,000 to help Jeb Bush in his successful race for governor in 1998.

Trump failed in his Florida gambling efforts, which Bush pointed out during a GOP presidential debate a year ago.

“The one guy that had some special interests that I know of that tried to get me to change my views on something—that was generous and gave me money—was Donald Trump,” Bush said. “He wanted casino gambling in Florida.”

Trump cut him off—and then failed to tell the truth by denying Bush’s claim.

Unknown until now, Trump and Fields in 1998 were simultaneously talking to Castro’s government, according to Newsweek. Trump years later sued Fields, accusing his former partner of swindling him by striking a separate arrangement to build the Seminole Hard Rock & Casino near Fort Lauderdale. The lawsuit sputtered out over the years, but it left behind a rich trove of documents about Trump’s business dealings.

Another consultant of Trump’s at the time, Roger Stone, told POLITICO Florida on Wednesday night that he knew Fields had tried to pitch a Cuba deal to Trump “but the CEO of Trump Hotel & Casino Resorts nixed the idea. I assume Fields went there [to Cuba] on his own … Richard was always coming up with harebrained schemes and then trying to get Trump to pay for them.”

Newsweek named Fields as the only one of the “representatives” who traveled to Cuba. Months after the trip, Seven Arrows submitted a Feb. 8, 1999 bill, to Trump’s firm for the $68,551.88 it had “incurred prior to and including a trip to Cuba on behalf of Trump Hotels & Casino Resorts Inc.,” Newsweek reported. It noted that the document showed “executives were still discussing the legal requirements for such a trip after the consultants had already returned from Cuba. The government does not provide after-the-fact licenses.”

“Under current law trips of the sort Mr. Fields took to Cuba must be sanctioned not only by the White House but are technically on behalf of a charity,’’ the bill, unearthed in an unnamed lawsuit, said, according to Newsweek. “The one most commonly used is Carinas Cuba.”

Newsweek noted that the name of the charity was actually “Caritas Cuba,” a Catholic Church group that helps the needy in Cuba. Also, the U.S. federal agency in charge of licensing, is the Office of Foreign Asset Control and not the White House. OFAC does not grant after-the-fact licenses for trips to Cuba.

For Kavulich, Fields’ decision to potentially use Caritas Cuba is “unfortunate and damaging” because the organization does good work. Kavulich said that, in the period of time Fields was reportedly in Cuba on Trump’s behalf, numerous businesses – from the music industry to hoteliers — traveled to Cuba to drum up business. Many were fully hosted by non-profit groups or non-U.S. business organizations or entities who fully paid the way of the U.S.-based business.

Just months after Trump’s organization paid Fields for his trip to Cuba, Trump toyed with running for president and gave a hardline speech in favor of the embargo. He said he opposed doing business with Cuba because it enriched the Castros. Stone helped write the speech.

By then, President Clinton’s administration had begun easing up on the embargo by licensing some businesses and more travel with the island, said Mauricio Claver-Carone, a conservative-leaning pro-embargo activist who’s the executive director of Cuba Democracy Advocates in Washington.

Claver-Carone said he believes that Fields was more responsible for potentially violating the embargo than Trump. Claver-Carone said he wasn’t particularly bothered that Trump wanted to explore business opportunities because he ultimately never appeared to do business with the Castro government.

He said it’s possible that Trump learned from his consultants about the dangers of doing business in Cuba in 1998, leading him to publicly espouse his hardline position a year later.

But it’s also possible that Trump violated the embargo.

“From a legal perspective, if the consulting firm Trump hired or any others broke the law, they should be investigated and fined,” Claver-Carone said in an email to POLITICO Florida. “But it will be fascinating to watch how those currently working and advocating to hand the Castro regime BILLIONS of dollars — beginning with the Obama Administration and Clinton campaign — will now attack Trump for this $68,000 expenditure. Perhaps everyone should step back, take a deep breath and have a moral gut-check.”